Grow Text SizeShrink Text Size
We Are 'Go' for Exploration 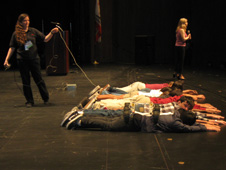 Rover driver Ashley Stroupe spoke to students as a rover model gently crept over volunteers in a demonstration of flexibility. Image credit: NASA/JPL 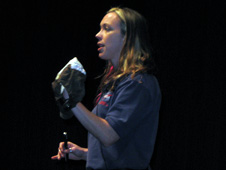 Engineer Heather Paul holds astronaut accessories for students to see. Image credit: NASA/JPL A NASA astronaut, a Mars rover "driver" and a space suit designer joined more than 1,000 middle school students in Long Beach, Calif., to discuss careers in space exploration. The event was held in conjunction with the NASA Project Management Challenge 2011, which brings together NASA scientists and engineers from across the nation. Local area high school students will attend a similar event for the Challenge's second day.

Heather Paul, a project engineer at Johnson Space Center in Houston, TX, pulled open a suitcase full of space suit accessories and asked students if space is really hot or really cold for an astronaut. (The answer: It's hot and cold.) Paul, who is working on life support designs for the next generation of space suits, shared with students that the scientific process they study in school is the foundation for how she tests ideas and plans future designs.

Engineer Ashley Stroupe from NASA's Jet Propulsion Laboratory in Pasadena, Calif., invited students on stage to temporarily simulate Mars rocks. Once they were lying on the ground, a rover model gently crept over them to demonstrate its flexibility. When Stroupe told students that women made up a lot of the team that worked on the Mars Exploration Rovers, the students let up a cheer.

And they kept cheering when former NASA Astronaut Ken Bowersox took the stage and told them what it is like to live in space. He explained how studying things in space offers scientists new understandings. He also told students how his stay on the International Space Station, along with another NASA astronaut and a Russian cosmonaut, illustrates how space exploration can build international teamwork.

"This is an opportunity to mirror the Project Management Challenge, whose theme this year is 'Explore and Inspire,'" explained Shelley Canright, NASA Manager of Elementary, Secondary and eEducation. "For these middle and high school students, we want them to see how our scientists and engineers explore space and continue to be inspired by it. We hope these students will also be inspired!"

The topic of exploration seemed to resonate with students. "They've been looking forward to this field trip and are really intrigued by the idea of space," said Jessica McDaniel, sixth grade math and science teacher at the Doris-Topsy Elvord Academy, a charter school in Long Beach. "It's amazing for them to think 'I'm here on Earth. There's so much more out there.' It's a thrill for them."
› Back To Top