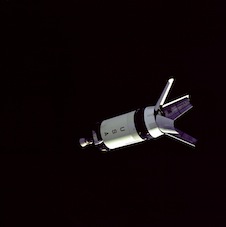 The McDonnell Douglas Astronautics Company provided the Saturn V's third stage. It launched in the spring of 1973. Once the second stage of the Saturn V reached a height of 115 statute miles, 935 miles down range, and a speed of 15,500 miles-per-hour the Saturn V's single engine third stage ignited, burning for about two minutes to place itself, the instrument unit, containing the guidance system, and the Apollo spacecraft into orbit at an altitude of 115 miles and a speed of almost 17,500 miles-per-hour. After a thorough checkout of equipment in earth orbit, the engine reignited and burned for 5-112 minutes reaching the lunar transfer velocity of 25,000 miles per hour, enough to escape earth orbit. After the propulsion system was removed, the stage was fitted on the ground with equipment that permitted three astronauts to live and work in space for long periods of time.