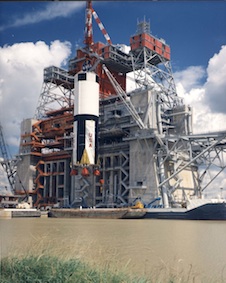 The first stage of the Saturn V Rocket includes the five F-1 engines producing nearly 7.7 million pounds of thrust. These powerful engines are required to lift the heavy rocket fast enough to escape Earth's gravity. The first stage engines are burned at liftoff and last for about 2.5 minutes taking the vehicle and payload to an altitude of 38 miles. The first stage then separates and burns up in the Earth's atmosphere. The first Saturn V was launched in an unmanned Earth orbital flight on November 9, 1967, with all three stages performing perfectly. Only one additional research and development flight test was made. Then on its third launch the huge Saturn V was manned. It sent astronauts Frank Borman, James A. Lovell, Jr., and William A. Anders on a voyage highlighted by mankind's first orbits of the Moon, on Christmas Eve, 1968.