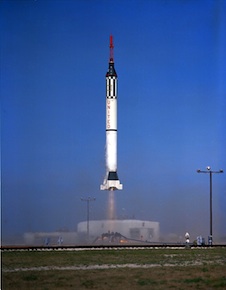 Image above: Mercury-Redstone 2 (MR-2) Launch with chimpanzee Ham aboard. Monkeys had been flown into space before, but Ham was the first higher primate to test a spacecraft.

After the Russians launched Sputnik and the Americans launched Explorer I, the space race was on. But Sputnik and Explorer were only machines in space. Next the great superpowers rushed to beat each other in a race to put a human in space. As a result, NASA asked von Braun’s group in Huntsville to modify and test an Army Redstone missile that the space Agency could use to launch a manned Mercury capsule. Between April 1959 and July 1960, von Braun’s engineers in Huntsville ground-tested the Redstone’s propulsion systems more than 200 times. Unfortunately, their first attempt to launch an unmanned Redstone was a complete failure. Already under pressure from newspapers and politicians reminding them of the progress the Russians were making, von Braun and his engineers went to work on the technical problems that had beset the launch. They successfully launched their first unmanned Mercury-Redstone on December 19, 1960, and then launched another on January 31, 1961.