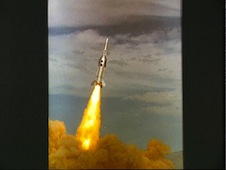 NASA had hoped to finish the Little Joe II abort qualification program by the end of 1965, but on December 17th, the Flight Readiness Board refused to accept the booster and canceled a launch set for the next day. A month later, at 8:15 am on January 20, 1966, the last Little Joe II headed toward an altitude of 24 kilometers and a downrange distance of 14 kilometers. Then, as designed, the launch vehicle started to tumble; the launch escape system sensed trouble and fired its abort rocket, carrying the command module away from impending disaster. All went well, the launch, the test conditions, the telemetry, the spacecraft and post flight analysis. The spacecraft windows picked up too much soot from the tower jettison motor, but the structure remained intact. Little Joe II was honorably retired, its basic purpose - making sure the launch escape and earth landing systems could protect the astronauts in either emergency or normal operations -- accomplished.