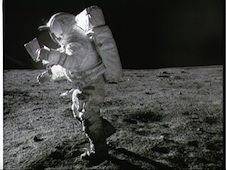 When all was said and done, the Apollo 13 accident caused only about a four-month slip of the next mission. Apollo 14 was launched on January 31, 1971. Four days later, Commander Alan Shepard and Lunar Module Pilot Ed Mitchell landed at Fra Mauro. During the final approach, they recognized Cone Crater right at pitchover and, soon thereafter, picked up the familiar pattern of smaller craters near their aim-point another mile or so to the west.

The only problem with the landing spot was that it was on an eight degree slope; and, for 24 of the next 33 hours, the astronauts had to contend with a tilting floor that threatened to dump Shepard over onto Mitchell's side of the spacecraft. In addition, the tilt contributed to a sleepless night between the two EVAs; but, otherwise, the LM attitude had no effect on the mission. No one had yet had a good sleep on the Moon and Shepard and Mitchell were to be no exception. But they were down, virtually on target, and otherwise were in great shape.

Within about three hours of the landing, after reconfiguring the LM for takeoff and after taking time out to have lunch and to pass along some excellent descriptions of the view out the window, Shepard and Mitchell started to don their backpacks. They were getting ready, as Shepard said, "to go out and play in the snow." The mental picture came easily. Outside the window, the soft, rounded forms of the craters gave the look of snow-covered ground and, although the color wasn't quite right - it was "mouse-brown or mouse-gray" depending on where they looked in relation to the Sun - the black lunar sky made it easy to think of a snowy winter's night back home. And to top off the image, Shepard and Mitchell only had to look at each other, standing there in their cumbersome spacesuits, donning the thick gloves, eager to get outside. Play in the snow, indeed!

Although Shepard and Mitchell could have used a good sleep before making the climb up to Cone Crater, both of them were too keyed up to make full use of the scheduled rest period. In the interest of getting in a full second EVA, they talked Houston into cutting the rest period by an hour and, naturally, spent a good deal of the time lying awake. Anticipation was a major contributor to their sleeplessness; but, as with Apollo 12, the mission simply wasn't going to be long enough for them to get out of the suits. Unpressurized, the suits were uncomfortable and irritating and, in part because of the neckrings, the astronauts felt that there was no place to rest their heads comfortably. And as a final factor, once they were stretched out in the hammocks the tilt of the spacecraft became more and more obvious. Rationally, they knew they were okay; but, at intervals through the night they awoke from a half sleep and, in the light lunar gravity, had the uncomfortable feeling that the LM was tipping over. Several times during the night, one or the other of them felt that they had to push aside the window covers and, just to be certain, take a look outside. In the morning, it was they who called Houston - a half hour before the agreed on wake-up time. They reported getting about four hours of sleep apiece, but that was certainly a generous estimate.

The Apollo 14 crew was particularly pressed for time. During their climb up to Cone there hadn't been time to do much more than grab samples. However, in the process, they demonstrated that it was possible to make long walking traverses over moderately difficult terrain. Perhaps if they had snaked their way up the hillside rather than making a frontal assault, the climb might not have been so arduous. But, in any event, Shepard and Mitchell had succeeded in climbing the hill and, although the Lunar Rover would provide a far more efficient way of doing geology, it was clear that, with some care taken in avoiding steep, uphill climbs, the later crews would be able to walk back to the LM from a Rover breakdown.

Apollo 14 was an important bit of preparation for the sophisticated Rover missions with which the Apollo series ended. It was a confidence builder. And it was also one for the record books. Al Shepard got a chance to take a few swings at a golf ball he'd brought along. The stiff suit forced him to swing one-handed and he fanned on the first two tries. But with the third he connected and the ball went "miles and miles and miles", he said. The truth wasn't quite so spectacular, but it was the first lunar golf shot.