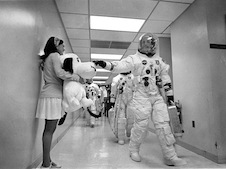 Image above: A Touch of Luck

› View of Apollo 10 Astronauts in Capsule During Mission

› Snoopy Soars with NASA at the Charles Schulz Museum

This spacecraft was the second Apollo mission to orbit the Moon, and the first to travel to the Moon with the full Apollo spacecraft, consisting of the Command and Service Module, named "Charlie Brown," and the Lunar Module, named "Snoopy." The primary objectives of the mission were to demonstrate crew, space vehicle and mission support facilities during a human lunar mission and to evaluate Lunar Module performance in a lunar environment. The mission was a full "dry run" for the Apollo 11 mission, in which all operations except the actual lunar landing were performed.

All systems on both spacecraft functioned nominally, the only exception being an anomaly in the automatic abort guidance system aboard the Lunar Module. In addition to extensive photography of the lunar surface from both the Lunar Module and Command Module, television images were taken and transmitted to Earth. The Apollo 10 Command Module "Charlie Brown" is on display at the Science Museum, London, England.