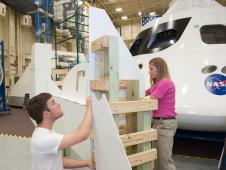 NASA's Christie Sauers and Kevin Doerr from the University of Texas in Austin test fitting the design of a ECLSS and Avionics Bay wall structure for the medium fidelity mockup. Image Credit: NASA › View larger 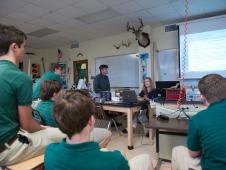 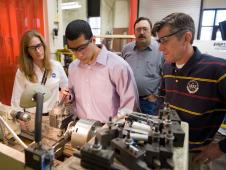 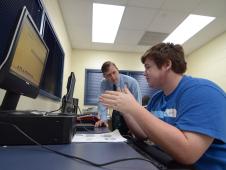 Fit, form and function are the basic tenets of any design task, but financing a project can be equally challenging. Proving that their fiscal creativity is just as impressive as their engineering prowess, NASA’s Orion Cockpit Working Group team created an innovative new program to keep their project on schedule and within budget, while inspiring a new generation of rocket scientists.

Students Shaping America’s Next Spacecraft (SSANS), is designed to reduce development costs by streamlining production for the Orion Multi–Purpose Crew Vehicle (MPCV) – America’s next generation spacecraft for human space exploration beyond low Earth orbit. At the same time, students are encouraged to gain additional skills in science, technology, engineering and math by designing and fabricating hardware for a spacecraft mockup to be used for testing.

“The SSANS project will challenge students to creatively design hardware and select materials that most efficiently meet functionality requirements, while significantly lowering cost and reducing schedule,” said JSC engineer Christie Sauers who has been working with an initial group of selected schools on a pilot project in the Houston area.

Vehicle design teams from NASA and Lockheed Martin, the primary contractor building Orion, need full–size Orion mockups to ensure vehicle design will allow crews to safely and effectively achieve their mission objectives. As a vehicle’s flight design matures, mockup assessments occur early and often to reduce the risk of finding design problems later in the process when it is more costly to change them.

With the Orion MPCV nearing Critical Design Review, NASA has built the shell for a medium fidelity mockup for more refined assessments. The next phase is to add the latest flight design hardware such as seats, a crew impact attenuation system, displays and controls, stowage lockers and equipment boxes –– and this facet of the project has opened the doors for schools and universities to provide students with hands on real world projects.

According to Sauers, participating schools are assigned a project package and provided materials and mentoring assistance. The students are responsible for designing, analyzing and fabricating Orion mockup components. As part of the process, students will participate in the NASA hardware development and approval process, including requirement, design, hardware acceptance, and test readiness reviews –– all essential to successful implementation of new NASA hardware.

A senior mechanical engineering student, James Tubb, of The University of Texas at Tyler, a SSANS program participant school commented, “Designing the pallet and struts for Orion allowed us to gain real life experience dealing with customers and meeting their requirements. During the design phase of this project we took many factors into consideration to ensure astronaut safety. I think that it's really, really cool that we actually worked on something that will be used by NASA,” he added.

Successful completion of the work with student groups will prepare the Orion MPCV project for the next round of mockup evaluations and verification activities, necessary to progress toward crewed Orion missions, which are scheduled to begin in 2016 The hardware they develop for the Orion MPCV will be used by NASA for testing, verification and astronaut training.

The initial SSANS project is expected to be expanded to other NASA centers, including the Glenn Research Center.
› Back To Top