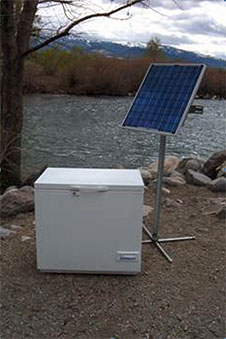 Solar-powered refrigerators like this one may soon reduce the cost and increase the availability of vaccines to people in remote regions. Image Credit: NASA.

The heat of the sun may soon be used to keep much-needed vaccines cool, thanks to a NASA technology originally designed for the moon that is being licensed here on Earth.

"This is an excellent opportunity for NASA technology to be used in a product that potentially may affect the lives of millions of people in undeveloped areas around the world,” said David Leestma, director of Johnson Space Center’s Advanced Planning Office.

"The World Health Organization (WHO) estimates that nearly two billion people in the world are without access to electricity that is essential for storage of vaccines and medicine," said Jim Airola, director of business development at SunDanzer. "The battery-free solar refrigeration technology has the potential to greatly reduce the cost and increase the availability of vaccines delivered to the poorest, neediest people in remote regions around the world."

The patented technology was originally developed by NASA engineers Michael Ewert and David Bergeron, team leader for NASA’s Advanced Refrigeration Technology Team. Ewert and Bergeron were investigating the use of a photovoltaic solar heat pump to cool lunar bases. They subsequently modified the technology and developed a refrigerator with a vapor compression, battery-free heat pump that directly converts electricity from solar photovoltaic panels into thermal energy that is stored internally using low-cost phase-change materials.

The battery-free solar-powered refrigerator technology can be used for a variety of purposes, including off-grid refrigeration for food and drinks, air conditioning systems in remote locations such as field hospitals, and refrigeration of milk tankers and other transportation vehicles. NASA holds three patents for the system.