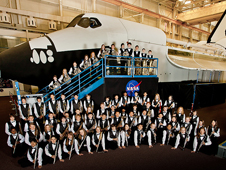 The Westbrook Intermediate School band poses by a mockup of the space shuttle.

The band at Westbrook Intermediate, a school with ties to the Johnson Space Center community, honored the Space Shuttle Program by commissioning and performing a song to pay tribute to the shuttle’s years of scientific discovery and exploration.

“We commissioned composer Christopher Tucker to write a new piece of music for our band to perform,” said Rick Brockway, band director. “Mr. Tucker is a popular composer for band. His music is tuneful and his orchestration colorful, making him ideal for young musicians. We asked Mr. Tucker for a work that would celebrate the 30 years of the space shuttle; reflecting upon both its successes and paying respect to those brave men and women who lost their lives in the pursuit of human space flight.”

In preparation for the trip, the band performed a pre-convention community concert, the first “premiere” of the commissioned space shuttle piece. Students and their families, including those who at work or live near JSC, were welcomed to celebrate this honor and got to hear the work dedicated to all those who made the Space Shuttle Program a success.

NASA and the school had previously developed a relationship during the conception of an art competition for students to celebrate space.

“The band directors of Westbrook Intermediate were part of the community that helped us very much in the design of the Humans in Space Youth Art Competition, which encourages youth worldwide to communicate their ideas about the future of space flight using visual, literary, video and musical artwork,” said Jancy McPhee, director of the competition. “Also, they were music judges and helped us carry out the Houston performance of the artwork in April of 2011 with the Clear Lake High School orchestra at the international Humans in Space Symposium.”

McPhee said a good working relationship developed between NASA and the school, “which just augmented the already-close ties that existed because many of the parents of attending children are NASA employees.”

“So, NASA is very much a part of this big event for the Intermediate School and the community,” McPhee said. Neesha Hosein, 281-792-7516
Johnson Space Center, Houston
Fareena.N.Hosein@nasa.gov
› Back To Top