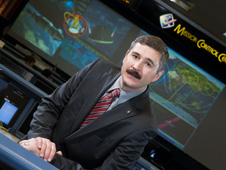 This profile continues a series to introduce the people behind the development of Orion. The first space-bound Orion vehicle recently arrived at Kennedy Space Center in Florida from Michoud Assembly Facility in New Orleans. At Kennedy, the spacecraft will be outfitted for Exploration Flight Test-1 (EFT-1), planned for 2014. EFT-1 is an essential step that will allow engineers to acquire critical re-entry flight performance data and demonstrate early integration capabilities to prepare Orion for deep space exploration.

Born and raised in Herkimer, N.Y. Graduated from Clarkson University with a bachelor’s degree in Mechanical and Aeronautical Engineering

What is your contribution to EFT-1?

To lead the team of flight controllers in mission control as the lead flight director. This task involves planning for the mission, training together as a team and supporting the mission from within the Mission Control Center.

Why is that contribution important?

EFT-1 will test the spacecraft and systems necessary to support human exploration beyond low Earth orbit.

Why do you need this flight test and what kinds of things do you hope to learn from it?

This flight test will send the Orion spacecraft to high Earth orbit, some 12 times higher than the International Space Station flies, through the Van Allen radiation belts and back to Earth. That will test the spacecraft’s radiation tolerance and ability to navigate in deep space prior to performing a precision entry and landing. The entry velocity of the EFT-1 spacecraft will be 80 to 90 percent of the return speed from the Moon, an important test of the heat shield on the Orion spacecraft.

What do you find most fulfilling or like best about your job?

Working with highly skilled professionals who are dedicated to their country and their work.

What’s the most interesting part of what you do here at JSC?

There are several missions that come to mind that all share a common theme - teams that really worked together. STS-99 was my first lead assignment as a space shuttle flight controller and we did something as a team that had never been done before – we mapped the Earth in three dimensions using RADAR. STS-132 was my last mission as a space shuttle flight director and my last lead assignment. The people on both of those teams just clicked and worked well together. They got past personal opinions, individual agendas and conflicting priorities to work towards a common goal – the mission. I really admire people who can do that – and do it successfully without it affecting personal working relationships.

When you’re not at the office, what do you like to do?

I like to travel to places that are cooler than Houston, cook and eat good food and spend time with my wife.

What were your career goals as a teenager?

I’ve wanted to be an engineer for a long time. I just didn’t think it would ever be as a flight director at NASA.

Was there someone in your life that influenced you to take this career path, or studies in school?

My father and mother. My dad was a huge influence in terms of work ethic. He was the son of a farmer and became a very successful farmer himself. He raised me to be a farmer with a hard working, task oriented work ethic. My mom encouraged me to follow my dream to be an engineer and the first in my immediate family to go to college and get a bachelor’s degree.