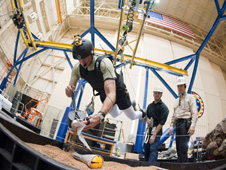 Various stations of rock setups are in place to practice gathering geologic samples in another world. Credit: NASA/STAFFORD

NASA’s Research and Technology Studies (RATS) team was in action once again as the group conducted initial testing to prepare for an integrated test this summer. The team created a simulated near-Earth asteroid (NEA) exploration mission in the Space Vehicle Mockup Facility at Johnson Space Center in December 2011 and January 2012.

The team performed two three-day human factors studies of the new multi-mission Space Exploration Vehicle (SEV) cabin, in addition to conducting simulated asteroid spacewalks using several different facilities at JSC. The SEV is being designed to have a flexible architecture, allowing it to rove on a planetary surface atop a wheeled chassis or fly in space using advanced in-space propulsion systems.

The JSC facilities used for the simulated spacewalks included the Virtual Reality Lab, the Active Response Gravity Offload System (ARGOS) and the Manned Maneuvering Unit trainer, or “air chair.” Testing occurred Dec. 13 to 15 and Jan. 18 to 20.

For three days and two nights during the simulations, the two-person crews lived, worked, ate, slept and exercised in the SEV cabin. Throughout the day, they traded responsibilities as extravehicular activity (EVA) and intravehicular crew members. During the spacewalks, the crews performed a variety of simulations using the suitports on the aft end of the SEV to exit the vehicle. These simulations were conducted for two reasons: 1) to provide a realistic level of crew activity to effectively evaluate the use of the new SEV cabin, and 2) to study how various systems and facilities at JSC might be used for future asteroid simulations.

Conducting the test at JSC enabled the RATS team to use a medley of tools and simulators that would be difficult to transport to traditional field-test locations. A high-fidelity, physics-based NEA simulation was a key component of the test and was integrated with the SEV’s control system and projected on a large screen in front of the vehicle. In addition to the NEA simulation, the Virtual Reality Lab was engaged to provide an immersive environment for the spacewalk crew members with integrated, real-time graphics from the NEA simulation and modeling of crew member motions and kinesthetic sensations. The Air Bearing Floor was another technology that allowed the crew to test the SEV in a “flying” configuration on an air sled, rather than as a rover on wheels. The ARGOS facility provided additional spacewalk simulation capability by allowing the crews to conduct sample collection and translation activities in a simulated microgravity environment. Last, the air chair allowed the crew to simulate how a jet pack might operate in microgravity and gain an awareness of the reaction forces one might expect when working on an asteroid surface. 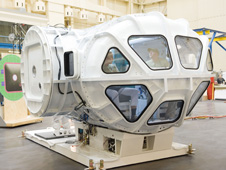 A mock SEV is shown in the "flying" configuration, mounted on an air sled, moving across the air-bearing floor. Credit: NASA/STAFFORD

“What we’re doing here today is very interesting,” Gernhardt said. “We worked with the engineering team here at NASA, and we developed this really great integrated (simulation) where we’re actually living in the Generation 2A Space Exploration Vehicle.”

Gernhardt explained that they actually flew around the simulated asteroid and did a near-field survey, flying off the surface and focusing on a 100-foot diameter area of interest. This allowed the team to gain an understanding of how we may one day operate in close proximity to an asteroid surface and measure the handling quality of the SEV.

“Tests like this one allow us to demonstrate new technologies, such as the SEV, while learning how we intend to operate them,” said test coordinator James Johnson. “Ultimately we have to develop our operational concept in parallel with the technology that will make that concept a reality.”

Through the Virtual Reality Lab, the NEA simulation was able to integrate with the Simplified Aid for EVA Rescue (SAFER) jet pack simulation. The SAFER is used on space station spacewalks in case astronauts become untethered, providing a way to fly back to safety, and its operation is frequently trained in the Virtual Reality Lab. Having the SAFER and NEA simulations incorporated allowed one crew member to be on a jet pack flying around the asteroid surface while the other was in the vehicle monitoring them. This type of coupling provides an understanding of what it might be like to work on and around an asteroid.

The particular asteroid NASA will first visit hasn’t been chosen yet, but engineers are developing tools that will allow optimization of the hardware depending on the characteristics of the asteroid.

What Else Are They Looking At?

Another aspect of the study was to evaluate the mechanics and human factors of suitports. Suitports allow a crew to conduct a spacewalk with significantly shorter prebreathe time as compared to current station spacewalks. Every time the crew exited the vehicle, they got into a mock-up spacesuit through the second generation suitport. This occurred four times a day during four one-hour spacewalks.

The ARGOS worksite had a number of different sampling sites set up, allowing the team to evaluate different translation lines, lightweight booms and geologic sampling techniques using a test protocol that was exercised during the NASA Extreme Environment Mission Operations (NEEMO) 15 analog mission. By repeating similar tests here at JSC with ARGOS, the NASA’s Analog Missions team was able to validate some of the concepts that the NEEMO mission exercised.

“It is this kind of synergy between each of NASA’s analog missions that help the agency gain a better understanding of future mission technologies, architectures and operational concepts,” said Analog Missions Project Manager Barbara Janoiko.

“In the attempt to research various ways to explore an asteroid, we’re looking at all aspects of that,” Gernhardt said. “Right now our basic plans are to have a deep-space habitat (in which) we’d actually travel to the asteroid. Once we get there, we would transfer to the smaller space exploration vehicle and travel over to the asteroid and stay there for a week at a time.”

Why Are Geologists Involved?

Professional geologists are a part of the team to help score how productive the studies are in conducting simulated science operations. The presence of geologists is important because future exploration of the moon, Mars, asteroids and more will likely have a significant focus on understanding the local geology.

“I think it’s very important to engage the scientific community in this evolving process so that we can do the best science we can when we get there,” Gernhardt said.

With RATS missions, an astronaut is teamed up with a geologist to help learn geology and provide important operational background on how the mission is conducted.