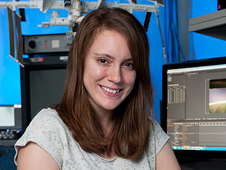 While flipping through the tens of thousands of images that our International Space Station astronauts send down during every expedition, Melissa Dawson stumbled onto an idea that would revolutionize the way every human being would see our planet. And this was only in her second month.

Dawson is an earth scientist with Jacobs Engineering working in Johnson Space Center’s Crew Earth Observations office. She has been at JSC since July 2011. Coming to work for NASA had always been a dream for Dawson since a 3rd grade class trip, when her imagination was seized by the raw power and scope of a shuttle launch.

“I thought everything about NASA and space travel was so fascinating, and knew I wanted to be a part of it,” Dawson explains.

Before starting at JSC, she received a bachelors of science in meteorology and a minor in physics from the University of Oklahoma. During this time, she had the opportunity to come to the center as a student intern, working in Astromaterials Curation. Her project during this time was integrating data from the lunar samples into Google Moon, creating interactive panoramas to give a ground-level view of the most important geological sites visited during Apollo. Dawson also spent time at Goddard Space Flight Center in Maryland, focusing on atmospheric research over the central Great Plains Region.

After graduation, Dawson joined the Crew Earth Observations office here at JSC full time, realizing her lifelong dream. It was during these first few weeks that she came across collections of images taken by recent space station crew members Ron Garan and Mike Fossum. The two had worked with Photo-TV personnel in Houston to rig up a camera to take continuous, automated images of the Earth’s surface. It was while looking through these that she first wondered what it would look like if hundreds of the photos were sequenced together as a video. The results were stunning.

Dawson set about fine tuning the format of this new creation, working with a colleague at Goddard to compose the videos into a final product. The end result offers a wholly new perspective of our planet for millions to enjoy, finally giving a glimpse into the magnificent views for which words have never been enough to illustrate.

Even with all of this, the Crew Earth Observations group is by no means done innovating. They are currently working on releasing exciting new infrared imagery taken from a modified camera onboard the station for scientific research studies here on the ground. Another potential project will be the creation of panoramic videos taken from the International Space Station, allowing viewers to “look around” as the station zooms over the Earth’s surface. They will also be releasing a public cataloging tool in the near future, allowing anyone who accesses the thousands of NASA’s images online to identify landmarks or other items of interest they are able to spot. This will transform these static images into a powerful educational tool for learning geography, geology and other scholastic topics that are directly linked to the unique views provided by the space station.

As one of the newest members of the Johnson Space Center work force and already an integral team member in the future of human spaceflight, Dawson could not be more excited.

"I love every aspect of my job. My managers give me free reign to be as creative as I want, which is how the videos and our video site came to be. On the more routine side of things, I get to come to work every day and look at and learn about our planet. I’d say that makes for a pretty exciting career!" Dan Huot, 281-483-5111
Johnson Space Center, Houston
Daniel.G.Huot@nasa.gov
› Back To Top