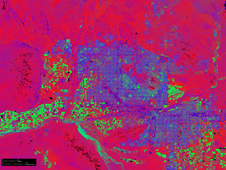 Where you live may say a lot about your socioeconomic status. It also may suggest how vulnerable you are to long periods of excessively hot weather.

Researchers at NASA’s Johnson Space Center, Arizona State University and the University of California at Riverside are studying the relationship between temperature variations and socioeconomic variables across metropolitan Phoenix. They have found that the urban poor are the most vulnerable to extreme heat.

Those in higher incomes tend to live in areas that are cooler due to the increased amount of vegetation, such as lush lawns and canopy trees, that surrounds homes or on higher-elevation hillslopes above the hotter Salt River valley floor. The urban poor tend to live in the urban core of metro Phoenix where the heat island effect is intense. These neighborhoods are located near industrial areas, commercial centers, and transportation corridors. There are few amenities, such as parks, and the landscaping has little or no grass or trees.

Propelled by a $1.4 million grant from the National Science Foundation as part of its Dynamics of Coupled Natural and Human Systems Program, the research team is compiling a history of the development of the metro Phoenix urban heat island. Urban heat islands result when existing soil and grass is replaced with materials such as asphalt and concrete that absorb heat during the day and reradiate it at night, thus causing increased temperatures especially during nighttime.

Sharon Harlan, a sociologist in the School of Human Evolution and Social Change at ASU, has pulled together the interdisciplinary team, which is comprised of social and natural scientists, public health experts, and educators.

Harlan is excited about the potential for this pioneering research.

“The problem of heat-related deaths and illnesses is very serious,” said Harlan. “Each year, heat fatalities in the U.S. occur in greater numbers than mortality from any other type of weather disaster. Global climate changes and rapidly growing cities are likely to compound and intensify the adverse health effects of heat islands around the world. Our research is integrating data with sophisticated modeling tools to analyze urban systems while keeping health equity considerations and the well-being of vulnerable populations at the center of attention. We want our research to be used to promote better decision-making about climate adaptation in cities.”

The primary objective of the research is to study high heat wave events—unexpected long-duration heat waves. Many cities including Chicago, Phoenix and Paris have encountered these events over the past several years.

Data from numerous sources, including remotely sensed imagery from NASA, are being used to create an historical record of how temperatures and vegetation patterns changed across metro Phoenix from the early 1970s to 2000. William Stefanov, senior geoscientist with Jacobs Technology in JSC’s Astromaterials Research and Exploration Science Directorate, is providing the orbital view of the metropolitan area.

The remotely sensed information is collected from satellites or airplanes and includes vegetation, temperature and land cover. Together it provides a map of the urban and suburban surface at a moment in time. In addition, researchers will use the data to do what is called change detection analysis. Images from one year or one season can be compared with those from another. The changes, such as those in vegetation, can be highlighted.

“We’re using a series of Landsat data for historical vegetation and surface temperature, high-resolution airborne imagery to get detailed maps of the land cover in our study neighborhoods and the Advanced Spaceborne Thermal Emission and Reflection Radiometer, or ASTER, a Japanese sensor on board the NASA Terra satellite, for current surface temperature data,” said Stefanov.

An airborne data flight over Phoenix by the NASA MODIS/ASTER Simulator, or MASTER, sensor is planned for next year to coincide with a ground data collection campaign. Among other biophysical information, high-resolution measurements of ground surface temperature will be obtained from the MASTER data throughout the metropolitan area to compare with and validate other airborne and satellite data sets used in the project.

According to several global climate change models, the southwestern United States is predicted to experience higher temperatures and more droughts over the coming century. If that happens, Phoenix is expected to experience more heat wave events.

The remotely sensed data are fed into high-resolution urban climate models to build predictive simulations of what will happen to the Phoenix metropolitan area if predicted climate change occurs there. Maps of “riskscapes” produced by this project will show where people in Phoenix are most vulnerable to high heat events.

“This project has theoretical aspects, but it also has an applied focus,” said Stefanov. “We are trying to develop tools that city planners and emergency responders can use. Urban planners also can use this data so that they can help plan the city’s growth and perhaps replace materials that absorb heat with those that are more reflective.”

“A lot of urban development is taking place around the world in arid or semiarid climates,” said Stefanov. “By studying Phoenix, researchers can better understand what these developing cities may face and how their environments may change as populations expand.”

For more information on the project, visit http://shesc.asu.edu/node/552

(Data provided by the United States Geological Survey EROS Data Center, Sioux Falls, S.D. This material is based upon work supported by the National Science Foundation (NSF) under Grant No. GEO-0816168, “Urban Vulnerability to Climate Change.” Any opinions, findings and conclusions or recommendations expressed in this material are those of the author(s) and do not necessarily reflect the views of the NSF.)