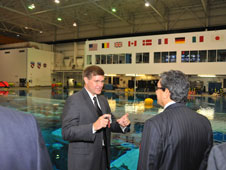 Astronauts and oil field workers will share a training facility at NASA's Johnson Space Center in Houston thanks to a new agreement that takes advantage of excess capacity at the agency's underwater training pool.

› View video about the announcement

Petrofac will use the NBL to provide survival training for offshore oil and gas workers. NASA will continue training International Space Station crews there for space walks. With the end of the Space Shuttle Program and the completion of space station assembly, the time required for NASA spacewalk training has decreased.

Oil field worker survival training is expected to begin in December. The NBL will provide trainees with one of the most realistic environments available to learn critical aspects of water survival.

The 202-foot-long, 102-foot-wide pool at the center of the NBL was designed to support spacewalk planning and training using full-scale mockups of the space shuttle and space station. While the 6.2 million-gallon, 40-foot-deep pool will continue to support NASA's activities, a transparent 12-foot faux floor will be installed in designated areas to support survival training.

In 2010, NASA selected the Raytheon team to manage and operate the facility under the NBL/Space Vehicle Mockup Operations Contract. NASA allowed Raytheon to use the facility when it is not being used for agency activities. The partnership will efficiently use NBL resources while combining the expertise and capability of Raytheon and Petrofac to create a center of excellence for survival training. 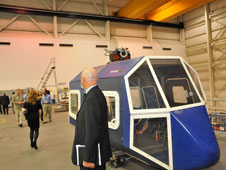 The Raytheon team has managed operations at the facility since 2003. The partnership initially will focus on three core survival courses applicable to the worldwide oil and gas industry.

The core courses are helicopter underwater egress training; basic offshore safety induction and emergency training; and further offshore emergency training. The partnership also will expand into the delivery of emergency response and crisis management training for oil, gas and other industry sectors by using the NBL's on-site test control rooms.

The announcement highlights NASA's efforts to find new and innovative partnerships. By opening Johnson Space Center's facilities and resources for use by non-aerospace industries, NASA hopes to find areas of common interest where both parties can help each other foster new technologies that not only improve life here on Earth, but also pave the way for future human exploration in space. The NBL is just one facility with the potential for use by outside industries with special needs for design, development, testing, operations or training, especially in extreme environments.