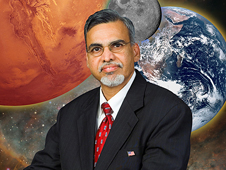 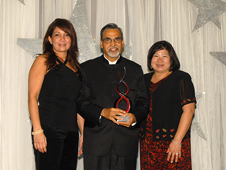 From left to right: Ginny Romero, APAHA secretary, Dr. Kamlesh Lulla and T.Q. Bui of JSC’s Office of Equal Opportunity and Diversity, pose for a photo. Credit: George Wong, courtesy of the APAHA 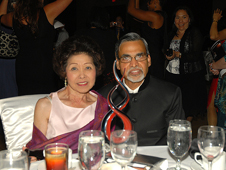 The Ellison Onizuka Award, established in memory of the first Asian-American in space and the hero who perished with Space Shuttle Challenger and her crew in 1986, recognizes Asian-Americans who have made notable contributions in science, technology, engineering and mathematics (STEM). The award also identifies individuals who embody the qualities that Onizuka modeled through his technical excellence and community outreach efforts.

“I was very pleased and thrilled,” Lulla said. “I have always admired astronaut Col. Ellison Onizuka. It was a great feeling to receive an award named in his honor.”

The award was made possible by JSC’s Asians Succeeding in Innovation and Aerospace Employee Resource Group, in collaboration with the Asian-Pacific American Heritage Association (APAHA) and JSC Office of Equal Opportunity and Diversity.

If anyone could begin to fill Onizuka’s footsteps, Lulla could do it. Internationally acclaimed for his research and scientific accomplishments in optical remote sensing technologies and Earth observation sciences, Lulla served as a chief scientist for Earth science payloads for shuttle and the International Space Station. His responsibilities included training shuttle astronauts in Earth imaging for more than 40 flights.

Lulla, also an author of over 200 scientific and technical papers and co-author and co-editor of the recent NASA book “Wings In Orbit,” gives credit to his Asian-American heritage for what he has been able to accomplish.

“My Asian-American heritage values that contributed to my career success: value of high-level education (two Ph.D. degrees); dedication to family and profession; integrity; respect for others; and hard work,” Lulla said.

His work with the University Research, Collaboration and Partnership Office, a part of JSC’s External Relations Office, led NASA to recognize Lulla in 2005 with an Exceptional Achievement Medal. The scientist has also inspired the next generation with his targeted outreach efforts on behalf of the agency. Lulla, a dedicated volunteer, works tirelessly to nurture the nation’s STEM workforce. Just in the past 10 years, Lulla’s made more than 250 presentations to high school students, undergraduates and graduates, covering about 30 of the 50 U. S. states. Locally, Lulla serves as a high school science fair mentor and district-level judge, and works with science teachers to infuse science curriculum with recent NASA discoveries.

Lulla says receiving the 2012 Ellison Onizuka Award shows that with education, personal empowerment and the desire to share one’s passions with the community, the sky—or space—is definitely the limit to what one can achieve. Catherine Ragin Williams
catherine.e.williams@nasa.gov
281.483.3317
› Back To Top