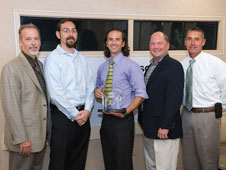 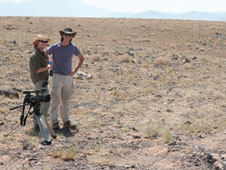 What is it like to be the winner of a prestigious award out of 11,000 contest entries from all 50 states and numerous countries? Ask Regan Geeseman, Bill Stafford and Kirk Olson of DB Consulting, Inc. and Heather Paul, Crew and Thermal Systems Division Strategic Communications Lead at JSC. The group was named a bronze winner in the 33rd Annual Telly Awards for their piece titled “NASA Desert Research and Technology Studies (RATS) Summary Video” in two categories, Information and Education. And, the winning didn’t stop there. The team also won NASA’s Videographer of the Year award for the same video.

The Telly Awards was founded in 1979 and is the premier award honoring outstanding local, regional and cable TV commercials and programs, the finest video and film productions, and online commercials, video and films. Winners represent the best work of the most respected advertising agencies, production companies, television stations, cable operators and corporate video departments in the world.

“The Telly Awards has a mission to honor the very best in film and video,” said Linda Day, executive director of the Telly Awards, in a press release. “DB Consulting Group’s accomplishment illustrates their creativity, skill, and dedication to their craft and serves as a testament to great film and video production.”

NASA’s Videographer of the Year Award

“Since NASA videographers work in obscurity and don't receive screen credits when their footage is used, we thought it would be good to find a way to recognize their talent,” said Rodney Grubbs, NASA DTV Program manager.

Inspired by the National Association of Broadcasters convention in Las Vegas where winners of the Pentagon's various "Videographer of the Year" awards were announced, Grubbs decided to sponsor the contest for NASA, which has three categories: Documentation, Production and On-orbit. The first award was presented in 2005.

“The IRD Imagery Team represent the highest standards of quality and creativity,” said Ed Wilson, chief, End User Service Office / IC, Information Resources Directorate, JSC. “They continually provide exceptional support to JSC and the agency on a vast range of products, from communications and outreach to highly sophisticated test documentation and instrumentation. The agency's acknowledgement of this team's remarkable capabilities and dedication highlights the exceptional talent resident within these individuals and their colleagues at Johnson.”

Paul said the team was excited about the project and enjoyed putting together videos that told the Desert RATS story in a creative way.

“Winning these three awards means so much to me; it is a huge honor,” Paul said. “In past years, I’ve been the on-screen talent and host for Desert RATS videos and education events. This was my first time working as the producer, and I really enjoyed it!”

Paul said her engineering background and experience with Desert RATS and NASA analog missions combined with the skills of two artistic videographers and a great editor to “create a really talented team.”

“Our success shows that great teamwork, creativity and communication results in fantastic, award-winning products,” Paul said. “I really look forward to working these types of projects in the future and hope to have the opportunity to work with Bill, Regan and Kirk again.”

Geeseman said he was “thrilled” when he found out about the award. His work on the winning video included his aerial-based video and field shots that were combined with Bill Stafford’s footage.

“I think it won because the video is exciting, interesting, well edited and well written,” Geeseman said. “It was created for the younger generations to pique interest in NASA, but mostly, I think it’s a great piece about NASA DESERT RATS.”

“Any time our imagery gets out about what NASA is doing, it’s a great feeling,” Geeseman said. “Unfortunately, some of the public thinks that since NASA retired the orbiters, we have stopped doing what NASA does. In fact, nothing could be farther from the truth. There are a lot of people that live and breathe the space program. I think videos like this one and still imagery from exploration and testing keeps America interested in what NASA does.”

Olson was “pleasantly surprised” by the win.

“It baffles me that some people, including some who live in our area, have no idea what NASA does, or that we have a continuous presence in space,” Olson said. “Being able to showcase some of the talented people who work at NASA, and the incredible projects they are working on, gives me hope that we can promote future projects to an even larger audience.”

Olson edited the video using footage shot by Geeseman and Stafford and commented that his cohorts did an “amazing job” responding to his requests when he needed specific shots.

“I couldn't believe that we had won Videographer of the Year award as well as two Telly Awards with our Desert Rats videos,” Stafford said. “When I heard the news, I actually just sat in my chair and thought about the long hours that the whole team spent to put the videos together; I was pumped. I felt our team really was a collection of the best of the best.” Neesha Hosein
fareena.n.hosein@nasa.gov
281.792.7516
› Back To Top