Grand Opening for Restored Saturn V Rocket
Johnson Space Center hosted the grand opening of a restored Houston landmark and national treasure, the immense Saturn V rocket, on July 20, 38 years to the day after humans first walked on the moon.

The 30-story tall rocket, which rests at the space center gate, is part of the Smithsonian National Air and Space Museum collection and one of only three such rockets in existence.

Speakers at the ribbon cutting ceremony included astronauts and moonwalkers John Young and Alan Bean, as well as astronauts Walt Cunningham, who flew on the Apollo 7 flight in earth orbit, and Joe Kerwin, who flew in an Apollo spacecraft to the Skylab space station. Apollo-era flight director Chris Kraft, Curator of the Apollo collection at the National Air and Space Museum Allan Needell, and JSC Center Director Mike Coats also participated.

Kraft said the anniversary brings back a number of memories.

“Each time this date rolls around, the landing of men on the moon seems to become more surreal,” Kraft said. “At the time, it seemed the start of a fantastic voyage to the stars.”

The Saturn V is one of the largest and most significant artifacts in the Smithsonian’s National Air and Space Museum collection. It has been on loan to Johnson since 1977. The rocket is made up of parts from launch vehicles originally designated for Apollo 18 and 20. The Saturn V remains the most powerful rocket ever built, and it was launched 13 times from 1967 to 1973, carrying 27 Apollo astronauts into space. Nine of the missions it launched traveled to the moon, and six landed there. The final Saturn V launch in 1973 put Skylab, America's first space station, in orbit. 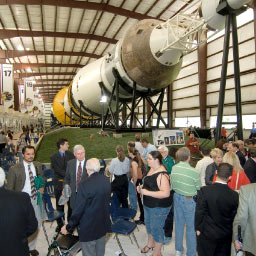 “I have to say there was genius behind the design of this thing,” said Bean. “Behind the hardware were thousands of men and women that were able to imagine this vehicle to begin with, and they were able to design and manufacture it.”

The Saturn V at Johnson had been exposed to the elements for more than 20 years while on display. The exposure had caused extensive corrosion and degradation.

In order to save the Saturn V, the National Air and Space Museum applied for a grant in 1999 to preserve the rocket through the Save America’s Treasures Program, the centerpiece of the White House National Millennium Commemoration. For the preservation, the museum received funds from Boeing, Lockheed Martin, Houston Endowment, Halliburton and other sources. Matching funds were provided by the National Park Service.

The goal was to return the rocket to a condition matching as closely as possible the way it would have appeared on the launch pad. The project team erected a climate-controlled building to house the rocket, designed and executed a testing program to evaluate the effectiveness of cleaning and repair treatments, developed a data management system for recording and retrieving information gathered, and stabilized and conserved the Saturn V to arrest its deterioration and make it suitable for display. The restoration ensures the Saturn V will remain on exhibit to inform and inspire many generations of visitors to come. The preservation work was performed by Conservation Solutions, Inc. of Washington, D.C.