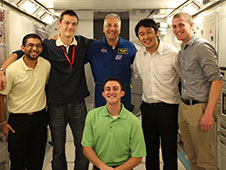 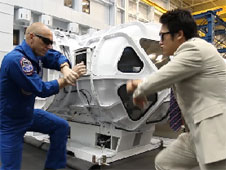 International pop sensation PSY wrote a song called “Gangnam Style” and made a dance-filled music video that has forever entered the hearts and minds of millions of people. Recently, Johnson Space Center Pathway interns came up with a parody of the video, but with an educational twist.

Called “NASA Johnson Style (Gangnam Style Parody),” it offers a light-hearted inside look at JSC and was shot at several center facilities using a number of nimble and quick-footed employees—including several astronauts.

“Gangnam Style” has become the most popular YouTube video ever, and continues to draw several million views per day.

Pathway interns were formerly known as co-operative education (co-op) students. Joyce Kenon, an intern this fall, came up with the idea. After writing her own lyrics to the “Gangnam Style” beat, she was unable to continue the project due to scheduling conflicts, but she remained passionate about its completion.

Several other interns took the project into their own hands after seeing its potential impact. Ronak Dave and Brian Schwing, who had helped develop previous videos created by co-op students, took on major roles in the production. Employee and former co-op student Adam Naids, another video veteran, also shared a large role in the video’s development as a producer.

When the final lyrics rewritten by Schwing were approved, intern Eric Sim recorded the lyrics over the “Gangnam Style” instrumental track. Gary Jordan, a fellow intern experienced in filmography and video editing, took control of that area. Dave, Schwing and Naids reached out to acquaintances at JSC to get approval for filming in various locations.

After a long and intense process, shooting for the parody began in mid-November. Well-known locations like the Mission Control Center, Rocket Park, Teague Auditorium and the front of Space Center Houston were used.

Many JSC team members, including astronaut Clayton Anderson, signed up to dance in the video. About a week after the initial shoot, a one-minute clip was produced. It was used to gain support from employees by showcasing the quality of the video and the message it would communicate. Shortly afterward, two more astronauts, Michael Massimino and Tracy Caldwell Dyson, joined the effort. Many more employees expressed interest in showcasing their work at NASA and made more locations available for filming.

Many parodies of “Gangnam Style” have been made, including videos from the U.S. Naval Academy, the U.S. Military Academy and Massachusetts Institute of Technology. But JSC’s creation, with its educational aspect, differs from those.

With extra support from JSC Public Affairs Officer Nicole Cloutier and many thanks to the JSC team, the video can now be found on the ReelNASA YouTube channel as “NASA Johnson Style (Gangnam Style Parody).”

View the video right now at: http://go.nasa.gov/ZmRigo
› Back To Top