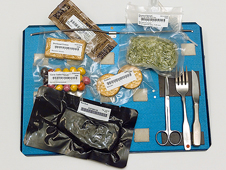 Shown is a sampling of some of the items flown as part of the space shuttle and the U.S. International Space Station food systems. Credit: NASA

Long-duration storage has a more significant impact on the nutritional value of space foods than does spaceflight, a NASA study has found. Results of the study point to the need to develop different packaging or other means to increase the shelf life of nutrients in the space food system for future multiyear exploration missions. These findings also highlight the importance of minimizing the time from food production to crew consumption.

The status of certain vitamins in the human body is altered during long stays in space. The status of vitamins D and folate, for example, decreases after long-duration spaceflight. In cases of altered nutrient status during flight, either the food/menu content of a nutrient or the body’s requirement for the nutrient may be altered. While the space foods have plenty of folate, concern turns to either the stability of nutrients in those foods or the amount required during spaceflight. This study sought to take the first step to assess nutrient stability in foods during spaceflight. This is a critical issue for exploration missions.

”Adequate nutrient intake is critical for crew health,” said Scott M. Smith, Ph.D., NASA nutritionist at JSC. “As early sailors found far too often, missing a single nutrient while spending months on exploration missions could be fatal. We need to be sure we know what nutrients space travelers need, and that they are in the food at the point of consumption.”

The results of the study are in the Journal of Food Science. The paper reports findings on the first long-duration flight stability study on foods from the space food system. The study provides data on nutrient stability in space foods and supplements over time and in the space environment.

Smith is part of the team of scientists authoring this paper. Other scientists at JSC who are co-authors of the paper are Vickie Kloeris, NASA food scientist and manager of the International Space Station food system; Michele Perchonok, Ph.D., NASA food scientist and manager of the Shuttle Food System and Advanced Food Technology Project; and Sara Zwart, Ph.D., USRA nutritional biochemist. Leslie Braby, research professor in the Department of Nuclear Engineering at Texas A&M, also served as a co-investigator and co-authored the paper.

The objectives of the study were to determine the stability of and water- and fat-soluble vitamins, fatty acids, and amino acids in foods from the space food system after long-duration spaceflight aboard the International Space Station. Five food items from the space food system—tortillas, salmon, almonds, broccoli au gratin and dried apricots—were used. Additionally, a multivitamin and a vitamin D supplement were used for this study.

Four bags each with six of each food item/supplement were launched on a space shuttle in July 2006. All bags except one were transferred to the space station. The bag that remained on the shuttle was returned to Earth 13 days later. The three bags that remained aboard the station were returned to Earth 353, 596 and 880 days later on space shuttle flights. Nine replicates of each food item and vitamin, from the same lots as those sent to space, remained in an environmental chamber on Earth to serve as controls. 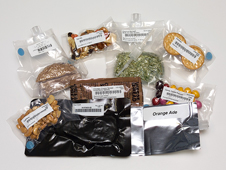 Shown is a sampling of some of the items flown as part of the space shuttle and the U.S. International Space Station food systems. Credit: NASA

Vitamins in the tortillas, salmon, and broccoli decreased significantly over time. Broccoli au gratin had 15 to 20 percent decreases in folic acid and in vitamins K and C. Most of the vitamins in the multivitamin supplement as well as the vitamin D supplement decreased after at least 353 days of storage (10-15% decrements). In addition, there was evidence for lipid peroxidation in the almonds after only 13 days of storage.

Researchers found that nutrients from flight samples did not degrade any faster than ground samples. Nutrient breakdown over time is one of the contributing factors to products having a shelf life/expiration date, although expiration is typically more a function of food safety and product palatability rather than vitamin content, for example. However, studies show that food quality (color, texture, etc.) may provide a general indication of nutritional loss of the food. Fresh fruits and vegetables, which provide many of the required nutrients, may not be available on NASA missions. Therefore, NASA is considering the use of emerging food preservation technologies, such as Pressure Assisted Thermal Sterilization and Microwave Sterilization, which result in higher initial quality and nutrition. The use of these technologies could improve the quality of food on Earth as well as for NASA missions.

While simple in design, the results of this study provide valuable information for focusing future studies to determine why the status of some nutrients is altered after long-duration spaceflight.