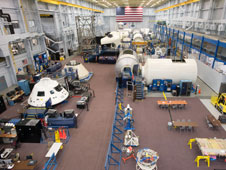 A view toward the center of the SVMF, showing two mock-ups of Orion on the left and the Payload Development Laboratory on the right. 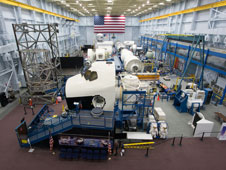 A lone Crew Compartment trainer remains in the SVMF, residing next to a mock-up of the SpaceX Dragon interior. 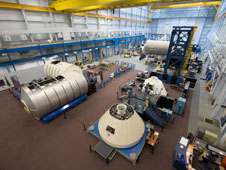 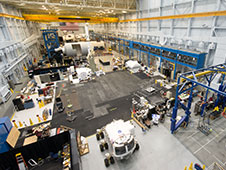 On another end of the building, robotics and more futuristic designs are put to the test. 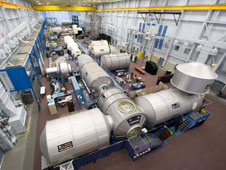 A bird's eye view of all the space station modules in their new configuration.

Photo credits for all: NASA/Robert Markowitz

When it comes to on-the-job training at NASA’s Johnson Space Center for astronauts and cosmonauts, there is one place that serves as the largest real-life classroom—Building 9’s Space Vehicle Mockup Facility (SVMF).

Working sometimes all night and even through the day, engineers and trainers toiled this past year to transform the triple hi-bay landmark into an even more functional facility than it was at the height of the shuttle program and early station assembly.

The makeover kicked off in parallel with the conclusion of the Space Shuttle Program and is much more than cosmetic, though that may be the first dramatic difference noted when walking in for training or a tour.

“We called this past year Shuttle Retirement and Reconfiguration,” said Allison McIntyre, chief of the SVMF Office. “We started planning in earnest about a year-and-a-half ago—actually working with the museums who had received shuttle artifacts.”

The most visible of those artifacts included the Full Fuselage Trainer (FFT) and one of the two Crew Compartment Trainers (CCT). The FFT now resides in the Seattle Museum of Flight, and the CCT at the National Museum of the U.S. Air Force in Dayton, Ohio. A lone CCT remains, but it now is flanked by International Space Station hardware and high-fidelity mock-ups of the future deep space human transport, Orion.

Additionally, space now is available and, even being used, by commercial companies providing cargo delivery to the station, as well as future crew transport to augment or replace reliance on crew rotations via the Russian Soyuz vehicle.

“As we made space available, we immediately started reconfiguring other components in the building to make room,” McIntyre said.

The station pressurized trainers stretch end to end as they do in space, but now include a full length and parallel walking platform, eliminating the need to use so many stairs to access one module or another.

“This new layout for the space station makes more sense,” McIntyre said. “It’s safer, and it will be more efficient and cohesive. So now all our modules are connected by a single course. We have all mock-ups now. We just added Node 3 (Tranquility), which has been under construction over the last year-and-a-half.”

Tim Reynolds is no stranger to the NASA/contractor workforce, nor is he a stranger to visitors lucky enough to tap his historical perspective of Building 9, in particular, and NASA in general. As Operation Control Center supervisor for Raytheon, he knows the history of the building’s every crevice and manages the schedules for as many as six station Expedition crews, their trainers, engineering evaluations, special visitor tours and the general public. He’s been at JSC for 17 years—13 inside Building 9.

Built in 1975 to support training for the under-development Space Shuttle Program, the SVMF now is more than three times the original size, with expansions in 1986 for future space station training and again in 1992 to handle simultaneous robotic operations with the shuttle’s Canadarm (and later Canadarm2).

“Everyone who has flown in space since 1980 has trained in this facility,” Reynolds said. “We’re the Apollo 13 of JSC. If something goes wrong on orbit, this is where they’re coming. Our phones start ringing. We pull this building up. We activate it. We staff it. We open our loose equipment warehouse. They come and get what they want and they solve the problems real time. I think that’s a role a lot of people probably don’t even know we do in this building. We’re mission support central over here. If you’re going to pull panels off and rewire something on orbit, this is where you come. We get excited about mission support. When they call, that’s what we live for.”

From a visitor’s glassed-in catwalk two stories above the floor, it might look like a museum. Though arguably historical, it is hardly a place for static displays. New lighting, signs and TV monitors draw visitors’ attention to the high-bay, where as many as 40 to 60 training classes occur during an average week. Training sessions for future crews heading to the station for long-duration missions could be going on at just about any time, but the general busiest period is from 7:30 a.m. until 6 p.m.

The record? Without hesitation, Reynolds relayed that 28 training classes occurred in one day, with the record being 86 for a single week.

The training catalog includes about 200 different SVMF classes to prepare astronauts in how to respond to just about any issue or emergency in orbit. They join trainers and flight controllers, who are experts in every aspect of the station’s systems. And, the emergency response sessions are very real.

“We have smoke machines hooked up to blow smoke,” Reynolds said. “The instructors can fail computers and throw malfunctions.”

With that many classes going on each day and week, it gets quite crowded. The need for space and organization is key to making life run smoothly inside the giant city block-long building, which now fashions an interior paint scheme for the first time ever.

With floor space freed up as the shuttle mock-ups were scheduled for delivery, Reynolds said it was a good time to put a reorganization plan into effect that could be carried out without disrupting crew training. It was a challenge that required extreme choreography.

“It took about six months to complete the painting—mostly carried out overnight—and we couldn’t stop training,” Reynolds said. “They used an airless paint sprayer, but we had to close all the hatches at night and put plastic over everything. Anybody in here from April through September saw that the building was a wreck, but the painters got finished before the end of the year, (and) all the shuttles got to their locations before the end of the summer. We managed to coordinate and move the two Payload Development Laboratories that we use for all of our experiment training to a more private area where the shuttle (FFT) was.”

Reynolds added with pride: “And we didn't cancel a single training class.”

McIntyre said she is proud of the work completed and agrees that the work isn’t finished yet.

“We still have room for expansion,” McIntyre said. “Our layout now has the station end, the last shuttle (CCT) until it finds a permanent home, and now the commercial cargo training mock-up for SpaceX’s Dragon. There’s still room for other stowage mockups like Orbital’s Cygnus when the time comes for its utilization.”

Another new addition strategically sprinkled throughout the building, complementing it both aesthetically and functionally, are blue consoles that had been used in the Mission Control Center. They now serve as consoles for trainers and the workforce that keeps Building 9 alive and operating each day from the Operations Control Center (OCC), which is at the center of the SVMF.

At one end, crews train for station missions while engineering evaluations of future spacecraft that may roam asteroids and planets are tested at the other. In between, the OCC manages it all. When you factor in maintenance and training equipment setup and teardown, along with computer software work every day, the SVMF hardly ever sleeps. Coupled with daily station training, Orion spacecraft configuration training, engineering evaluations and future commercial cargo and crew activities, there’s no shortage of work to keep the Building 9 staff busy.

Said Reynolds, “If you’re flying, we’re training.”
› Back To Top