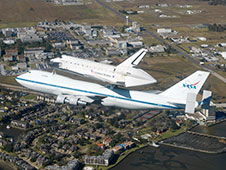 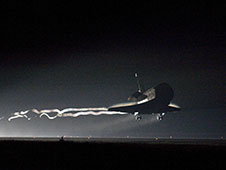 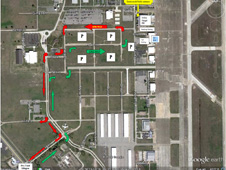 HOUSTON -- The space shuttle Endeavour, carried atop NASA's 747 Shuttle Carrier Aircraft, is expected to visit Houston Sept. 17-19, weather permitting, and be available for public viewing and media access on its way to permanent display in Los Angeles.

The carrier aircraft with Endeavour will fly approximately 1,500 feet above various areas of Houston and Clear Lake following its sunrise departure Monday, Sept. 17 from NASA's Kennedy Space Center, Fla. Endeavour will be on its way to the California Science Center in Los Angeles, where it will be placed on permanent display.

The Texas Gulf Coast region flyover, in cooperation with the Federal Aviation Administration, is scheduled to occur between approximately 9 and 10:30 a.m. CDT. En route to Texas, the SCA/Endeavour combination are expected to fly over the Mississippi Gulf Coast and eastern New Orleans.

The specific route and timing of Endeavour's flight over Houston on Sept. 17 depends upon weather and operational constraints.

However, the aircraft is expected to fly near a variety of landmarks in the greater Houston area. Some of those include the three major airports - George Bush Intercontinental, William P. Hobby and Ellington – as well as the downtown skyline, and the San Jacinto Monument.

Landing at Ellington is scheduled for approximately 10:45 a.m. with final positioning near the NASA Hangar 990 pedestrian gate. Public viewing within about 100 feet of the vehicle will begin 30 minutes after it is parked and safed by ground personnel. Viewing will continue until 7 p.m. Airport gates will reopen to the public from 8 a.m. until 7 p.m. Tuesday, Sept. 18.

Prior to landing at Ellington, the SCA/Endeavour combination will navigate a flyover of the Johnson Space Center area as well.

NASA will provide updates on Endeavour's cross-country flight via social media using the hashtags #SpotTheShuttle and #OV105 – Endeavour’s orbiter vehicle designation. Updates and public availability plans for Endeavour's stop in Houston also will be updated regularly on this page.

News media wishing to cover the arrival and departure at Ellington must request credentials through the JSC Newsroom at 281-483-5111 no later than noon CDT Thursday, Sept. 13. Badges can be picked up at Ellington’s NASA badging office in Building 267 (adjacent to NASA’s Hangar 276 at the south end of the field). Badging is open from 7:30 a.m. – 4 p.m. weekdays.

Endeavour completed 25 missions, spent 299 days in orbit, orbited the Earth 4,671 times while traveling 122,883,151 statute miles. NASA has transferred Endeavour to the California Science Center where it soon will begin its new mission to commemorate past achievements in space and to educate and inspire future generations of explorers.

If the flight must be postponed for any reason, an additional notice will be released.

For more information about NASA's transfer of space shuttles to museums, visit: