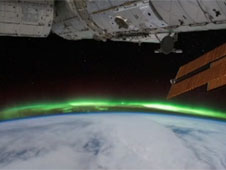 Master Storyteller Bob Rogers, creator and producer of Space Center Houston’s (SCH) original film "On Human Destiny," spoke at SCH June 26 to an audience of representatives from local school districts, chambers of commerce, the City of Houston and JSC and SCH employees gathered at the Visitor Center’s Blast-off Theatre to see the premiere of "Human Destiny," the updated version of his initial film. The original 20-year old film has been shown since SCH’s opening, and needed the update to continue to tell NASA’s complete story.

“In 1992 we were still in the shadow of Challenger and the International Space Station was a theory,” Rogers explains. “The updated version acknowledges those at NASA who created, built and flew the ISS and highlights the accomplishments of the shuttle program from return to flight forward.”

In addition to JSC’s Visitor Center, Rogers’ BRC Imagination Arts Company created the Shuttle Launch Experience ride and designed the Apollo Launch Center building at KSC’s Visitor Center. He also developed the Jim Lovell exhibit at the Adler Planetarium in Chicago, IL, and a master plan for the proposed Space Park facility on Hainan Island in China, adjacent to the Chinese launch facility.

Still Photo/Video Librarian Jody Russell, with JSC’s Media Resource Center, worked with film researchers almost daily for eight months on the project. Russell found the film” a very moving and exciting tribute to everyone at NASA and to their hard work and dedication to aerospace. I believe it will inspire others to want to continue the journey that NASA has only just begun. I know I’ve taken for granted what I do every day at JSC because imagery is my day-to-day life here. However, I walked away from this film with such a sense of what an awesome part of history I’ve been a part of.”

Fellow librarian and co-worker Mike Gentry appreciated Rogers’ remarks prior to the film. “Without his words,” Gentry noted, “I doubt I would have noticed that he used no landings, splashdowns or returns to stay away from giving the concept of completion. The Challenger and Columbia pieces are always painful and disturbing but they a part of history just like Lincoln’s and Kennedy’s assassinations, etc. and must be included.”

In welcoming Rogers at the premiere, SCH President & CEO Richard Allen said, “This new movie experience dramatically tells the story of NASA from the early days of space exploration right up to the current mission of the International Space Station. The movie even provides a glimpse of what lies ahead. Many of our guests who have seen this movie believe it is a ‘must-see’ opportunity for every family member!”
› Back To Top