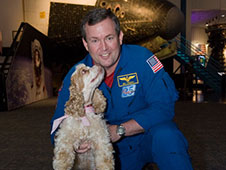 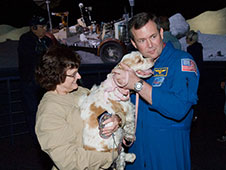 Foreman, a veteran of two space shuttle missions, STS-123 and STS-129, came across a news story about Jenny in the local newspaper and was inspired to make the number one item on a bucket list created by her owner – visit to Space Center Houston and meet an astronaut – a reality.

"I read about Jenny in the Houston Chronicle,” Foreman said. “I have always owned and loved dogs and Jenny's story pulled at my heart strings. I had to reach out to her owner and meet this dog."

“Jenny came from a local shelter in December,” said Karen Poe, Jenny’s owner. “She had a tumor a little larger than a golf ball on her right jaw. After the vet removed the tumor and we learned Jenny had bone cancer, I brought her to my house. Our plan was to keep her comfortable as the cancer grew and make her as happy as we could.”

Poe said that Jenny has still been very happy, wagging her tail and still eating, despite her condition. The vet and Poe decided they could manage her symptoms for a while since Poe thought Jenny had some time left.

“After bringing her home, one of our volunteers said to consider her remaining time her retirement years,” Poe said. “That got me thinking about a bucket list. Some of the volunteers submitted suggestions, and then I pared it down to ten. I tried to focus on the local area and have some easy to do items, and then Jenny's really big items that I wasn't sure were attainable.”

Jenny and her entourage received a warm welcome at Johnson Space Center, where she got to pose for photos with her new astronaut friend. Then, the group went on to SCH where a specialty doggy tour was set up, and Jenny was made an honorary employee of SCH.

"The event was fantastic,” Foreman said. “JSC and SCH put the whole thing together in less than a day and Space Center Houston absolutely rolled out the red carpet for Jenny, her owner and her support team...Jenny had a great time!"

Bob Martel, from JSC’s Clinical Services Branch, also participated in the tour. His family adopted their Cocker Spaniel, Trent, from the same group and was excited to see how the SCH tour turned out.

Jenny is fulfilling her bucket list around Houston as a way to raise awareness for pet adoption. Other items on Jenny's to-do list include: appearing on TV with a local weather forecaster, riding the Bolivar Island ferry, playing in the Texas bluebonnets and throwing out the first pitch at an Astros baseball game.

“The tour at Space Center Houston was awesome,” Poe said. “We were all blown away by how nice and gracious everyone was. Mike Foreman patiently posed for picture after picture with Jenny. I particularly enjoyed watching the children come up and get their pictures made with the two of them.”

Poe was impressed that Roger Bornstein, Space Center Houston Director of Communications and Marketing, offered to walk Jenny while the rest of the group got lunch from the café. “The food court staff prepared a specialty hamburger for Jenny, which she loved. Everyone took their time and made us all feel welcome. Space Center Houston has been the highlight of Jenny's list.”

“NASA was her number one item,” Poe said. “Jenny and I are still amazed at how quickly she checked that one off. She has now completed everything but the Astros. They are just getting into town, so we will start working on that one.” Neesha Hosein
fareena.n.hosein@nasa.gov
› Back To Top