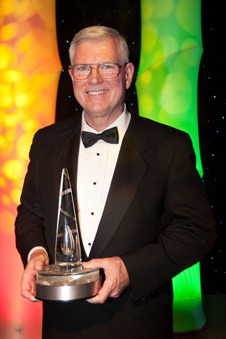 As director of JSC, Coats is responsible for a team of more than 3,200 civil servants and an annual budget in excess of $4.5 billion dollars.

Coats was born into a military family in 1946 in Riverside, California. His father, Col. Loyd A. Coats, USAF, was the biggest single influence on his life. “He was an Air Force bomber pilot, flying B-17’s with the 8th Air Force in WWII and then B-29’s in Korea,” Coats told RNASA. “His eyesight deteriorated. He then became commanding officer of the Maintenance Squadron for the SR-71 spy plane. He also had a tour in Thailand during the Vietnam War.”

“My early childhood obsession with landing planes on aircraft carriers came about because I wanted to make my parents proud and still do something a bit different than my father,” Coats said. “Becoming a Navy pilot was my goal from a very young age.”

The other great love of his life was also settled at a young age, in the summer before his senior year of high school. “We were with my father at Amarillo AFB when I first saw Diane at the Base swimming pool,” Coats said. “Cupid was on target, and I walked home that day and quite seriously told my mother I just saw the girl I was going to marry. Instead of laughing as I expected, my mother said, ‘Tell me all about her.’ I hadn’t yet spoken to her, so I was embarrassed I didn’t know her name, or even the sound of her voice. I was determined to introduce myself the next day at the pool, but she was with her boyfriend all day. I had to return to Riverside to start football practice, so I thought I had lost my future wife before I even knew her name. 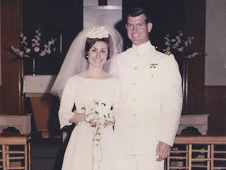 “During my first year at the Naval Academy, my mother kept writing me about a wonderful girl who lived behind them in base housing. She kept insisting I write to this young lady. To make my mother happy, I finally did so. I eventually asked for a picture. Needless to say, it was an unforgettable day when the picture arrived, and I realized she was the same girl I had seen at the pool two years earlier!” Her name was Diane Carson.

Diane’s father, an Air Force dentist, had been transferred from Amarillo to Riverside. The seemingly predestined couple corresponded cross-country for four years. They married at Tinker AFB in Oklahoma City in 1969. “My mother always enjoyed reminding me she ‘found’ my wife for me,” Coats said. “But,” he added, “I would remind her I had stated my intent to marry Diane two years before she ‘found’ her!”

Coats graduated from Ramona High School in 1964. “I was blessed with a long string of outstanding teachers in Riverside,” Coats said. “I was well prepared to compete academically when I entered the Naval Academy.”

During his plebe year, Coats’ father visited him in Annapolis. His father had “lost a lot of friends in each of the wars and seemed reluctant to tell us his ‘war stories.’” So Coats hadn’t fully appreciated his father’s accomplishments until that visit. “He was in his dress uniform wearing all his medals,” Coats remembered. “Every midshipman and officer did a double take and stared at his chest full of medals. I flew 315 combat missions in Vietnam and logged over 400 carrier landings, but I don’t feel like I came close to measuring up to his record during three wars. He was the hardest working man I’ve ever seen and retired as a full colonel despite never having gone to college.” 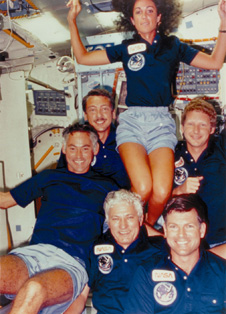 In 1968, Coats received his B.S. degree from the Naval Academy. He earned his pilot’s wings the next year. “I had never flown a plane until I reported to Navy flight training at Pensacola,” Coats said. “My first solo, in the Navy’s T-34 basic trainer, was a bit of a surprise. To say my heart was pounding is an understatement. I can understand why it’s not uncommon for a student to forget about landing again to pick up his instructor and just flies back to home base alone. Fortunately, I didn’t strand my instructor out in the boondocks, which is not particularly career enhancing!”

After earning his wings, he served aboard the USS Kitty Hawk in Southeast Asia. He then served as a flight instructor with the A-7E Readiness Training Squadron in Lemoore, California from 1972 until he was selected for the U.S. Naval Test Pilot School in Patuxent River, Maryland in 1973. After serving as project officer and test pilot for the A-7 and A-4 aircraft, he became an instructor at Patuxent. During this time, he also earned a master’s degree in science and technology from George Washington University. He then earned a master’s in aeronautical engineering in 1979 from the U.S. Naval Postgraduate School in Monterey, California.

Coats was selected commander of STS 61-H. That mission was canceled following the Challenger accident in January 1986.

“The Challenger tragedy was simply devastating,” Coats said. “I had lost several good friends in Vietnam and at the Naval Air Test Center, but losing so many close friends at once was hard to comprehend and accept. The first six years in the astronaut office had been like a dream come true. We were working 12 to 14 hour days and loving it. When Challenger happened, it was like a sledgehammer blow reminding us that spaceflight is a difficult, risky, and unforgiving business.” 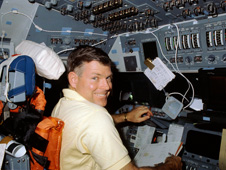 Coats grieved for all his fellow astronauts, but most especially for Challenger’s pilot, Mike Smith. “We had been at the Naval Academy together, on the same ship and airwing while flying missions in Vietnam, in the same Navy Test Pilot School class, and then shared an office as the two spin instructors at the Naval Test Pilot School,” Coats recalled. “We discussed at great length whether to apply for the first class of Shuttle astronauts. I decided the night before the deadline to apply ‘just to see how far I’d get,’ and Mike decided he wanted to wait and see what the ‘peacetime’ Navy was like.” Smith applied two years later and joined the next astronaut class.

“I’ve been determined since then to do what I could to make human spaceflight as safe as possible,” Coats said. “While it’s important and inevitable that the human race will leave planet Earth and begin to explore the universe, there are no shortcuts to space. We have to take the time and expend the resources to do it right.”

Coats commanded STS-29 in March of 1989 with crewmembers John Blaha, James Bagian, James Buchli, and Robert Springer. After this flight of Discovery which deployed a Tracking Data Relay Satellite, Coats became the acting chief of the Astronaut Office.

The first unclassified DoD flight, STS-39, was Coat’s final flight, also on Discovery. The primary customer for this flight was Mike Griffin, then with the Strategic Defense Initiative (now Missile Defense Agency). “I consider myself fortunate to have had the opportunity to work with Mike for more than 20 years,” Coats said. “I quickly came to appreciate his technical expertise and common sense, and we’ve been friends ever since.” 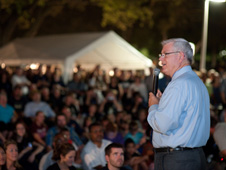 STS-39 launched on April 28, 1991. Coats’ crew of L. Blaine Hammond, Guion Bluford, Greg Harbaugh, Richard Hieb, Donald McMonagle, and Charles Veach, worked in two shifts to complete experiments and to deploy and retrieve the Shuttle Pallet Satellite (SPAS) II. The high inclination flight offered an amazing view. Coats said, “We were glued to the windows whenever we had a spare minute.” After this flight, Coats had logged 463 hours in space.

Soon after Griffin became NASA Administrator, he offered Coats, whom he calls a “naturally gifted leader,” the position of Director of JSC. Coats assumed the position in November 2005. 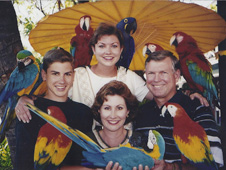 Under Coats’ leadership, JSC implemented some 80 partnerships and hosted summits and job fairs to help displaced workers. To help NASA attract and retain future leaders, Coats instituted the Program Project Management Development, the Space Systems Engineering Development, and the Project Leadership programs. Other initiatives included Joint Leadership and Employee Leadership teams, a Formal Mentoring Initiative, the Innovation and Inclusion Consortium, and a Young Professionals Group. “Attracting our young people into the STEM fields of study is crucial if the United States is going to be globally economically competitive,” Coats said. “An agreed upon and sustainable vision for space exploration is a necessary first step in retaining our rising stars like our young career Stellar Awardees.”

NASA has recognized Coats with honors including the Distinguished Service Medal and the JSC Presidential Rank Award. He’s also earned many military honors including the Defense Superior Service Medal and three Distinguished Flying Crosses. He was inducted into the Astronaut Hall of Fame in 2007, and tonight receives the 2012 National Space Trophy. 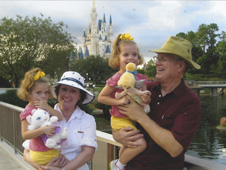 Mike and Diane are the proud parents of Laura and Paul. Paul is a lawyer with Lockheed Martin, and Laura’s husband, Patrick Larkin, has his own practice in Pearland, Texas. Laura works part-time at Clear Lake High School since the birth of identical twins, Abby and Anna, five years ago. Coats said, “Life is good when my biggest problem is getting them mixed up and calling them by the wrong names. They usually just give me a look like ‘there goes Pops again.”

Coats added, “I have been blessed to work with dedicated and highly motivated people who routinely make the impossible look easy. The Space Shuttle and the International Space Station are tremendous achievements, but just the first of many rungs on the ladder to the stars. I can’t wait to get to work in the morning and can’t wait to get home to my family in the evening. It’s nice to be able to tell Abby and Anna that sometimes dreams really do come true.”