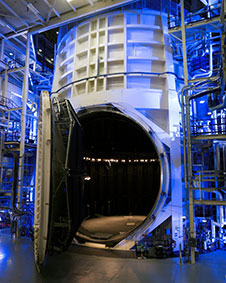 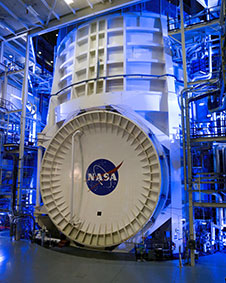 Views of Thermal Vacuum Test Chamber A with its door open and closed in building 32 at Johnson Space Center. Credit: NASA

An upgrade eight years in the making is complete, and Johnson Space Center is now home to the only vacuum chamber in the world that is large enough and cold enough to provide a space-like environment for the James Webb Space Telescope.

While the rest of Houston was sweltering through the August heat, JSC’s massive Chamber A successfully made it down to 11 Kelvin (K) – about 440 degrees below zero on the Fahrenheit scale. That accomplishment is the result of work that started with a feasibility study in 2004. The design work was then done in 2007 and 2008, before demolition and reconstruction began in 2009. It was topped off by a successful, three-week functional test of the entire integrated chamber system with all its new components working together for the first time. Initial performance of all the new subsystems was even better than predicted during this initial test drive.

To make Chamber A – a National Historic Landmark which has been used to test space vehicles and components for all major programs since Apollo – cold enough, clean enough and quiescent enough to test an optical telescope like JWST, a number of modifications were made, both to the vacuum chamber itself and to its building infrastructure. Helium and liquid nitrogen shrouds were installed, along with their respective refrigeration and delivery systems; the vacuum system was switched to oil-free; and the chamber’s data, power, control, and air flow systems were all upgraded – to name just a few of the modifications. Most significantly, the entire system for supplying liquid nitrogen to the chamber interior was redesigned and re-plumbed. It went from a powered, pump-fed system with well over a hundred valves – all potential reliability risks – to a passive, thermo-siphon system with less than two dozen valves. Not only will it keep working even during a power outage or a hurricane, but it uses less than half the liquid nitrogen as before. Clean, economical, AND reliable!

Now that the modifications are complete and have been shown to be successful, the next step is to install a class 10000 cleanroom zone to the front of the chamber. Construction will start in February, spearheaded by Goddard Space Flight Center and the JWST program, and the new walls will obscure Chamber A’s famous 40-ton door. But you can still catch a glimpse of it closing majestically in the 1998 movie, Armageddon.

Pieces of the JWST ground support equipment are scheduled to start arriving at JSC for testing in early 2014, followed by an engineering development unit “Pathfinder” test article. By 2017, Chamber A will have performed a half dozen lead-in tests for the program and be ready to test the one-of-a-kind flight telescope in a full-up thermal vacuum environment. This series of tests leading up to the final test of the flight unit will go a long way toward reducing the technical risks that naturally accompany such a technologically ambitious science mission. The telescope, which is billed as the successor to the Hubble Space Telescope – is working toward a 2018 launch, when it will be sent to an orbit about 1 million miles from Earth. From there it is expected to see the first galaxies that formed in the early universe and stars forming planetary systems.
› Back To Top