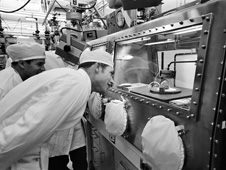 Forty-one years ago, on August 1, 1971, Apollo 15 mission commander David R. Scott relayed exciting news to Mission Control and the scientists in the back room.

That sample, nicknamed the Genesis Rock, sample number 15415, was an anorthosite, a piece of the moon’s primordial crust. Geologists, hoping to learn more about the moon and its origins, selected the Hadley-Apennines landing site for precisely this reason. While not the oldest lunar sample brought back from the moon, geologists at the Manned Spacecraft Center (now known as the Johnson Space Center) later concluded that this rock was about 4 billion years old.

Apollo 15 was the first of three J missions, often called the true scientific missions to the moon. These missions featured the Lunar Rover equipped with a television camera, a redesigned Lunar Module (LM) that allowed the crews to stay for extended periods on the moon and long duration backpacks for the moonwalkers allowing astronauts to spend more time exploring the lunar surface. Engineers also made changes to the Service Module, filling it with remote sensing instruments designed to document the moon’s surface. During the crew’s three spacewalks, Scott and James B. Irwin spent almost nineteen hours exploring the moon and covered 17.5 miles of lunar terrain in the lunar rover.

To prepare for this historic flight, the crew trained for months. An important part of that training included geology field trips with geologists from universities and the center as well as the U.S. Geological Survey. Apollo 15, 16 and 17 crews dedicated much more time to these exercises than their colleagues on the earlier Apollo lunar landings. Apollo 15 astronauts traveled to a different geological site each month, which amounted to about 18 trips, compared to five or six for the previous flight of Apollo 14. Scott and Irwin practiced in terrain similar to the conditions they would find on the moon and within the limitations they would face on the surface. Gary E. Lofgren helped train the Apollo 15 crew and now serves as the lunar curator.

“You’d draw a circle around how far they could go,” Lofgren explained. “So this is the area that they can move around in. They couldn’t get farther from the LM than a certain distance … The amount of area that they could traverse was pretty small. We would pick out spots, and then we would tell them to collect the kinds of samples that were obvious to collect at that site: collect a sample of the soil and a sample of the rocks.” 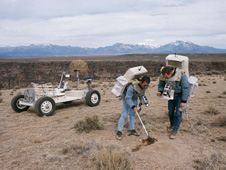 Apollo 15 astronauts practice collecting samples during a traverse in the Taos, New Mexico, area. The Grover sits behind the astronauts. Credit: NASA

CapCom Joseph P. Allen and scientists also gained valuable experience as they sat in a separate simulated control room and science support room. Scott and Irwin communicated by radio to Allen, as they would during their flight. Following the simulation, instructors who walked along with the two men pointed out what they had overlooked in their traverse.

In preparation for their landing in the Hadley-Apennine region, the instructors along with Scott and Irwin, visited volcanic sites like Hawaii and areas “where they would see the kinds of rocks we expected to find as part of that primitive crust,” Lofgren noted. These sites included the San Gabriel Mountains, Ely, Minnesota, the Rio Grande Gorge and the San Juan Mountains. Their training paid off in spades. Leon T. Silver, an Apollo 15 instructor from Cal Tech, called the mission the “apotheosis of all the things we’d been planning to do… it was the coming together of developing the technical capabilities, preparing men to be explorers as well as many, many other things.”

He and others were confident that they would find a piece of the ancient crust. Why did these scientists place such faith in two former test pilots? “Well,” he explained, “that’s because the human intention, well educated, well prepared, can squeeze things out, you understand?”