Grow Text SizeShrink Text Size
And So We Begin Again 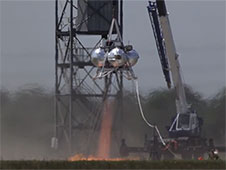 On May 1, 2013, Morpheus fired it's engine in a hot fire configuration at Johnson Space Center. This was the first fully integrated test of Morpheus unit B.
› Watch the video

The roar of a 5,000 pound rocket engine has returned to the Johnson Space Center. The Morpheus team has completed the build-up of our “Bravo” vehicle, conducted numerous integrated tests, and has now stepped into our flight test program. We are picking up where we left off – in fact we never stopped working. We have completed our first major milestone in conducting a 50-second static hot fire of the main engine in the vehicle, including simultaneous demonstration of thrust vector control (TVC) and integrated methane reaction control system (RCS) jet firings. Thrust vector control is used to balance and fly the vehicle, while the RCS jets are used to keep the vehicle pointed in the correct direction. We will step into dynamic tethered flights soon, in preparation for our return to KSC this summer.

The knowledge and insight we gained over the 27 test firings of the previous vehicle are fully incorporated into the testing we’re beginning now. Although a hardware failure led to the loss of the original vehicle last August, the failure and our internal investigation gave us valuable insight into areas that needed improvement. The vehicle may look largely the same as the previous version, but there are numerous changes that have been incorporated. We have now implemented 70 different upgrades to the vehicle and ground systems to both address potential contributors to the test failure, and also to improve operability and maintainability.

Over the past eight months, team members have redesigned and implemented cost-effective improvements such as advanced engine performance capabilities (while recovering and reusing some primary engine components from the previous vehicle), enhanced communication protocols, redundant instrumentation where appropriate, increased structural margins, and mitigated launch vibroacoustic environments.

We are still a lean development, rapid prototype project with specific objectives for testing technologies in relevant flight environments. We continue to carry vehicle risks with us into every test – but they are informed risks. We choose to not spend the time and money to eliminate all risks because we would not be able to afford any of the testing we do. And we will continue to learn and advance through each test, successful or otherwise.
› Back To Top