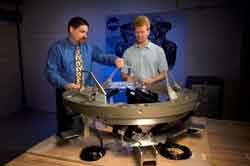 The Low Impact Docking System (LIDS) project is developing the next generation docking mechanism that will be used to capture and connect two future space vehicles. The genesis of the LIDS work dates back to the mid 1980s, but a more formal project was formed in 1996 in support of the X-38 Crew Return Vehicle program. The X-38 was a vehicle that would be Shuttle-delivered, would be berthed to the International Space Station (ISS), and would undock and return to Earth in an emergency. While the LIDS design has evolved from one that was based on early developmental requirements into today's LIDS, which meets Constellation requirements, it is still intended to be an advancement in docking mechanism technology to support future docking and berthing operations.

Currently any vehicle traveling to the ISS has to have the capability to either dock to the ISS or be berthed by using the ISS robotic arm. This limits NASA from using the Russian Androgynous Peripheral Assembly System (APAS) mechanism as a berthing device because the arm cannot provide enough force to drive the interface hardware together. Also, a berthing mechanism cannot easily handle two vehicles that are free flying. As a result, there are two operations that require two different mechanisms: a berthing mechanism and a docking mechanism. Because LIDS can be tuned to support berthing operations or docking operations, it will be less expensive to build and maintain over long periods of time. 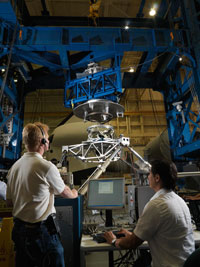 When the Crew Exploration Vehicle (CEV) project began in 2005, only the hard-to-use Russian docking mechanism and the U.S. Common Berthing Mechanism (CBM) were available, and neither met Constellation requirements. Because of the berthing mechanism's size and the need for a robotic arm to berth smaller spacecraft, this equipment was too costly for use by projects with smaller vehicles. At that time, the LIDS project was actively pursuing development of a lightweight reconfigurable, modern, next-generation docking mechanism and was selected for funding by the CEV project.

In the late 1980s and early 1990s, NASA had a docking mechanism design, but in the early 1990s, it was decided that NASA and the Russians would cooperate to build the ISS.To do this, NASA began procuring Russian hardware and abandoned its formal docking mechanism design work. Existing docking mechanisms all require significant energy to make their passive mechanisms work. For example, when the Shuttle docks with the ISS, several thousand pounds of force are required for the interfaces to mate. These forces subject the spacecraft structures to significant stress and affect orbits and flight attitudes. Today's LIDS mechanism would allow vehicles to dock with tens of pounds of force, a two-order-of-magnitude reduction that would allow modern vehicles to be designed for lower impacts thus reducing structural mass. 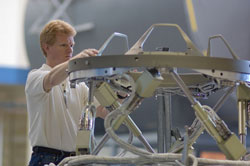 Today, instead of having a mechanical system that requires energy, which means the two interfacing vehicles use thrust or velocity to align and capture, our new mechanism,LIDS, has the capacity to sense loads in real time, coordinate the motion of electrical-mechanical actuators, and move the capture system without requiring energy. When two vehicles make contact, this contact is registered by a load-sensing system made up of software and electronic components. The load-sensing system drives the modern capture device, eliminating the risky operations and the forces that are generated during a traditional docking operation.

The LIDS, like the APAS and the ASTP, has an androgynous design, meaning two copies of the mechanisms can dock together. This is a much more difficult design than unique, active- and passive-interface designs, but it allows flexibility in choosing which vehicle will be active. With this design, future rescue vehicles could attach to a disabled vehicle and rescue it. 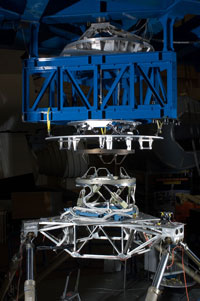 The LIDS capture system is driven by software parameters. Because of this, the mechanism can be easily reconfigured resulting in a docking mechanism that can be quickly and easily tuned to act like a different mechanism, behaving differently for each unique mission or operation. During July 2008, the LIDS project completed their Preliminary Design Review and was granted approval to continue the design and begin building flight hardware. This was a major milestone.

This hardware was built and delivered in early 2007. In July 2008, the LIDS and Hubble projects performed a highly successful fit-check between the current LIDS active mechanism and the HST flight LIDS interface at the Goddard Space Flight Center.

Future vehicles will all have a LIDS mechanism, but today the ISS does not have a LIDS interface for docking. The LIDS team is developing a LIDS adapter, called APAS to LIDS Adaptor System (ATLAS), for the ISS. It will launch on top of the CEV and it will be delivered on the first two CEV flights to the ISS.

Additionally, the LIDS team is investigating how to construct a LIDS adapter that could be delivered by the Shuttle before it is retired. This is important because there are mass penalties with the CEV-delivery approach: the CEV had to be reshaped to fit ATLAS and the number of crew had to be reduced for the system to carry the adapters on the first two CEV flights. If approved, the hardware for the Shuttle adapters will have to be built within a year and be launched during the summer of 2010. This type of LIDS adapter mates to a CBM. On the other hand, if the adapter flies on the CEV, it must mate with an APAS. Thus, if the Shuttle adapters can meet the Shuttle launch schedule, the ATLAS adapters will not be built.

American private industry and the European Space Agency (ESA) are also interested in NASA's LIDS design. Bigelow Aerospace is currently developing a private space station and plans to use LIDS to be compatible with the NASA standard interface. ESA has also expressed interest in understanding the LIDS design so it can make docking interfaces compatible for visiting the ISS and for crew rescue compatibility. LIDS is currently the next-generation docking mechanism and its use should help push NASA, and very likely the private sector, forward well into the future.