Searching for Antimatter and Dark Matter 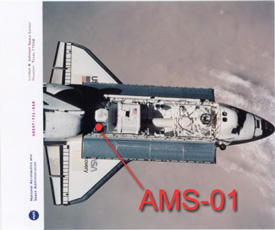 Johnson Space Center (JSC) is home to the Alpha Magnetic Spectrometer (AMS) Project Office. The AMS is a high profile space-based particle physics experiment that is led by Nobel laureate Samuel Ting of the Massachusetts Institute of Technology (MIT).

The AMS experiment is a state-of-the-art particle physics detector being constructed, tested, and operated by an international team composed of 56 institutes from 16 countries and organized under United States Department of Energy (DOE) sponsorship. The AMS experiment will use the unique environment of space to advance knowledge of the universe and lead to an understanding of the universe’s origin.

The AMS-01 flew in space in June 1998 aboard the Space Shuttle Discovery (Figure 1). The second AMS detector, designated AMS-02, is being integrated and tested to fly on the International Space Station (ISS). During STS-134/ULF6 scheduled for July 2010, the AMS-02 will be transported in the cargo bay of the Space Shuttle for installation on the ISS. After it is installed on the ISS S3 Upper Inboard Payload Attach Site, the AMS will remain active for at least three years (Figure 2). 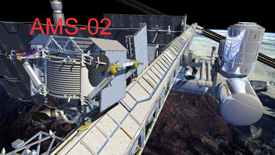 Orbiting the Earth at an altitude of 200 nautical miles, the AMS is pioneering a new frontier in particle physics research for the 21st century. This unique scientific mission of exploration seeks to understand fundamental issues shared by physics, astrophysics, and cosmology on the origin and structure of the universe. Although the AMS is specifically looking for antimatter and dark matter, as the first magnetic spectrometer in space, AMS has and will collect information from cosmic sources emanating from stars and galaxies millions of light years beyond the Milky Way. The technical challenges to build such a detector for use in space have been surmounted through the close collaboration of the AMS scientists and industries around the world whose efforts have resulted in the development of new technologies and higher standards of precision. 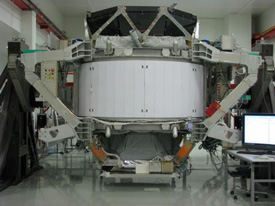 Figure 3: AMS-02 Detector during Integration in Geneva
Photo credit: NASA The magnetic field is used to bend the path of charged cosmic particles as they pass through five different types of detectors. The Transition Radiation Detector (TRD) measures particles passing at speeds nearly that of the speed of light. The Time of Flight (TOF) detector measures the charge and velocity of passing particles. The Silicon Tracker measures the coordinates of charged particles in the magnetic field. The Ring Image CHerenkov Counter (RICH) measures both the velocity and charge of the particles. The Electromagnetic Calorimeter (ECAL) measures the energy and coordinates of electrons, positrons, and gamma rays. Figure 4 shows the AMS detector and its response to different particles or nuclei. The AMS also employs two star trackers and a GPS system to provide high accuracy position and attitude data. With more than 300,000 data channels, the detector gathers an extremely large amount of data which is then processed and sent to Earth by using the ISS power, communication, and data infrastructure. 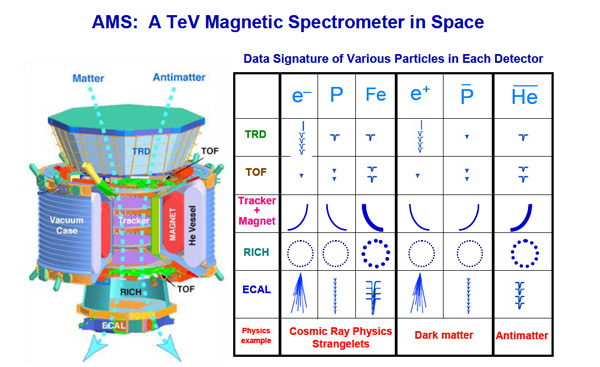 Figure 4: Cutaway View of the AMS Detector (left). Response of the detectors layers to a charged particle of energy 0.3 TeV (Data courtesy of MIT)

In addition to these fundamental research goals, AMS will provide the first operational experience with a superconducting cryogenic magnet in space and greatly extend the knowledge base regarding superfluid cryogenic systems operation in space. These are enabling technologies for the potential use of magnetic shielding as a method of radiation protection during extended manned space flight, as well as for space power and propulsion systems.

The AMS Project Office, housed within the Engineering Directorate at JSC, is responsible for building all integration hardware and software to connect the collaboration-built science detector to the Space Shuttle and the ISS. This includes more than 3,500 lbs of flight integration hardware. The AMS Project Office acts as the liaison between the DOE-sponsored collaboration team and the Space Shuttle Program Office, the ISS Program Office, the JSC Mission Operations Directorate (MOD), and other functional organizations at JSC. The AMS Project Office must also certify the entire payload as safe and ready for flight and be the prime integrator for the entire payload.

All evidence currently indicates that the universe is made of matter; however, the Big Bang theory (Figure 5) requires equal amounts of matter and antimatter. Theories that explain this apparent asymmetry violate other measurements. Whether or not there is significant antimatter is one of the fundamental questions of the origin and nature of the universe. Any observations of an antihelium nucleus would provide strong evidence for the existence of antimatter (Figure 6). In 1999, AMS-01 established a new upper limit of 10-6 for the antihelium/helium flux ratio in the universe. AMS-02 will search with a sensitivity of 10-9, an improvement of three orders of magnitude, sufficient to reach the edge of the expanding universe and resolve the issue definitively. 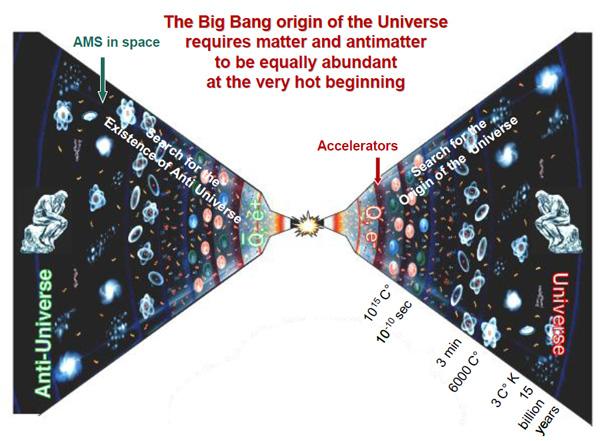 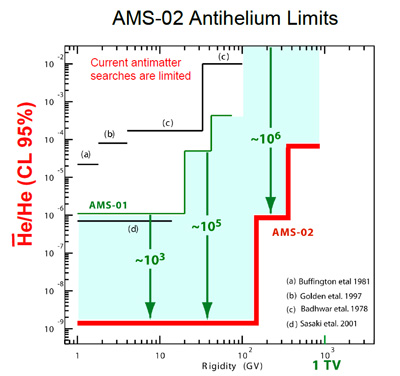 The visible matter in the universe (largely made up of stars) adds up to less than 5 percent of the total mass that is known to exist from many other observations. The other 95 percent is dark – either dark matter, which is estimated at 20 percent of the universe by weight, or dark energy, which makes up the balance. The exact nature of both still is unknown. One of the leading candidates for dark matter is the neutralino. If neutralinos exist, they should be colliding with each other and giving off charged particles that can be detected by AMS-02. Any peaks in the background positron, anti-proton, or gamma flux could signal the presence of neutralinos or other dark matter candidates. Preliminary data from the Payload for Antimatter Exploration and Light-nuclei Astrophysics (PAMELA) and Advanced Thin Ionization Calorimeter (ATIC) missions appear to indicate the existence of such a peak at energy levels well within the range of AMS-02’s capabilities.

Cosmic radiation is a significant obstacle for a manned flight to Mars. Accurate measurements of the cosmic ray environment are needed to plan appropriate countermeasures. Most cosmic ray studies are done by balloon-borne satellites with flight times that are measured in days; these studies have shown significant variations. AMS-02 will be operative on the ISS for a nominal mission of three years, gathering an immense amount of accurate data and allowing measurements of the long-term variation of the cosmic ray flux over a wide energy range, for nuclei from protons to iron (Figures 4 and 7). After the nominal mission, AMS-02 can continue to provide cosmic ray measurements. In addition to understanding the radiation protection required for manned interplanetary flight, these data will allow the interstellar propagation and origins of cosmic rays to be pinned down. 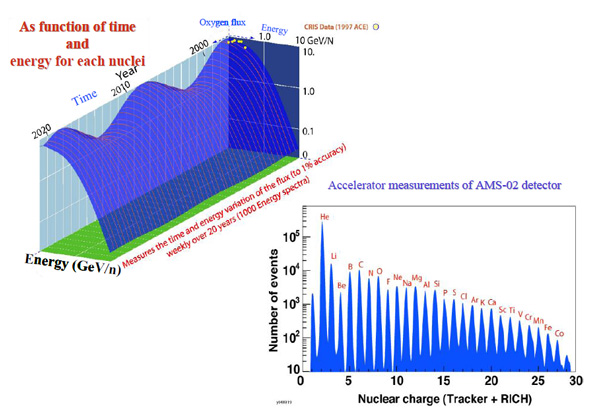