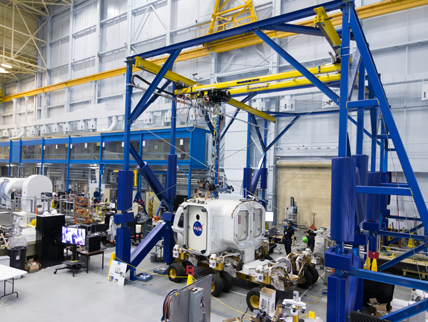 A test participant translates over the top of the Space Exploration Vehicle during a microgravity simulation in the Active Response Gravity Offload System (ARGOS)
Photo credit: NASA

The Active Response Gravity Offload System (ARGOS) is designed to simulate reduced gravity environments, such as Lunar, Martian, or microgravity, using a system similar to an overhead bridge crane. ARGOS uses an inline load cell to continuously offload of a portion of a human or robotic payload’s weight during all dynamic motions, which can include walking, running, and jumping under Lunar or Martian gravities, as well as a wide range of microgravity activities. Using a cable angle sensor, ARGOS actively tracks and follows the payload’s motion in all horizontal directions to maintain a vertical offload force. The facility is capable of supporting surface operation studies, suit and vehicle requirements development, suit and vehicle design evaluation, robotic development, mass handling studies, and crew training with both suited and shirt-sleeved subjects.

Currently under continuous development and improvement, ARGOS is intended to support testing, development, and training for future missions to the Moon, Mars, asteroids, or any other celestial destination. It is also intended to support both IVA and EVA training for NASA’s ongoing activities on the International Space Station. The current steel structure, which measures 41’ x 24’ x 25’ tall, accommodates movement in all three directions of motion (one vertical and two horizontal). The ARGOS facility is rapidly reconfigurable to allow for a quick turnaround between different tests and a variety of surface or training analogs. 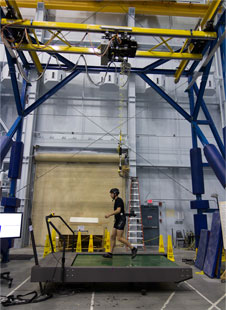 The first generation ARGOS system was extensively tested and evaluated with both human and robotic subjects over the course of approximately two years and was retired in July 2012. A second generation system is currently in use and provides improved dynamics and sensitivity, as well as an increased lifting capacity of 750 lbs. The second generation system also corresponded to an increase of the structure height from 18.5’ to 25’ to provide a larger simulation envelope.

In addition, various interfaces to the system (also known as gimbals) have been developed to provide a full range of natural motion for a realistic simulation. These gimbals have been developed for both human (suited and shirt-sleeve) and robotic subjects, and are specialized for various test situations (such as planetary gravities or microgravity).

How the System Works

The ARGOS facility uses computer controlled electric motors to drive motion in all axes. The vertical axis connects to the load with a steel cable and measures the load on the system with an in-line load cell that is constantly monitored by the control system. The control system commands the motor to raise or lower as the subject moves to maintain a constant offload force. The vertical axis is capable of high accelerations with a top speed of 10 ft/s for a 300 lb payload and 4 ft/s for a 750 lb payload. 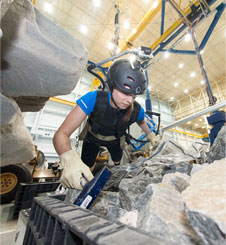 The horizontal axes are driven by electric motors that are attached to friction drive wheels which drive on the underside of the trolley rails. Motion of the subject is measured by a cable angle sensor, which is used to command the system to keep the lifting mechanism centered above the load. The horizontal system is capable of high accelerations and a top speed of 10 ft/s for any payload weight. In addition, ARGOS is designed to accurately reproduce a microgravity environment. This means that a force in any direction results in constant velocity motion until another force acts on the payload, which results in high fidelity testing and training.

The Future of ARGOS

The facility will continue to support human (shirt-sleeve and suited) and robotic testing and training in simulated reduced gravity environments. The ARGOS concept can also be scaled to larger heights and areas, and future concepts may be designed to offload multiple payloads simultaneously.