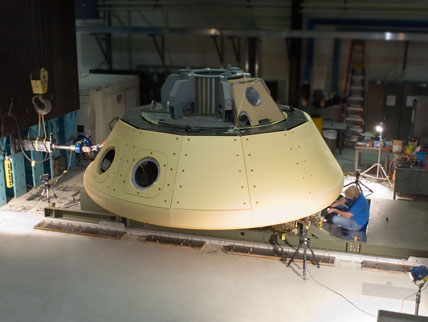 The Structures Test Lab was built in 1964 and has supported the Apollo, Skylab, Apollo/Soyuz, Space Shuttle and International Space Station Programs. STL personnel have performed hardware development and flight qualification testing as well as tests in support of on-orbit anomaly resolution.

This facility is operated to meet the static testing needs specific to JSC customers and is capable of controlling single actuator tests up to 220,000 lbf and multiple actuator tests up to 100,000 lbf, as well as thermal chamber static tests. Load, strain, pressure and deflection instrumentation can be installed and up to 256 channels of data can be acquired. A collection of mechanical load frames enables long-term fatigue/fracture mechanics coupon testing for the purposes of characterizing crack propagation in aerospace alloys.

The STL is on-call to the International Space Station Program in a matter of hours, 7 days-a-week. The STL is responsive to customer’s schedules and can flexibly accommodate test need dates among its multiple test cells. The STL conducts an average of 30 tests per year with time to completion ranging from a few days to multiple weeks.

For simple requests, the STL incorporates a “Test Express” process. These tests can normally be performed within eight hours upon receipt of the test hardware.

Test operations are tailored to NASA’s needs for space flight hardware and incorporate quality control, safety procedures, calibrated instrumentation and certified cranes for handling Class I flight hardware. The STL can also perform development testing which does not require this level of oversight. The test capabilities of the STL have been developed and maintained to meet JSC’s specific needs for rapid anomaly resolution, flight hardware qualification and recertification, engineering evaluation and hardware development.  STL personnel have up to 30+ years of experience testing aerospace hardware and they assist customers in the development of their test requirements and test plans.

The Structures Test Lab has 13,000 square feet of floor space with a 39-foot ceiling, accessible by a 22’ tall x 18’ wide roll-up door. Two bridge cranes (20-ton & 5-ton) at the 29’ level serve the two sides of the Hi-Bay. Nine I-beam columns (5’ deep by 16” wide) are embedded in the 6’6” deep concrete floor to provide interfaces for test fixtures. 10’ tall x 20’ wide steel plates with T-slots on 3” centers attached to each side of the 20’ tall x 21’ wide strongback wall permit the attachment of heavy test fixtures and hydraulic actuators. The STL also has a 3.5 ton T-Slot Table for smaller-scale structural testing.

A large inventory of hydraulic actuators, load cells, servo-valves, manifolds, flex hoses and test fixtures are maintained in the STL and are available for customer use. The STL personnel can assemble custom test fixtures that are brought into the STL as the customer requires. Eleven tension/compression load frames sized from 5 KIP to 220 KIP are also available for a wide variety of test applications.

The STL’s Aero ST load control system is state-of-the-art and can manage up to 32 load control channels with a PC-based data acquisition system that can record 256 data channels. A portable load control and data acquisition system can be taken outside the STL and provides 2 load control channels and up to 40 data channels for small, standalone static tests. A large inventory of test instrumentation is also available and includes linear resistive deflection potentiometers, displacement/velocity transducers, thermocouples, force washers and strain gages. An impact test machine and a variable speed/displacement bending machine are also available in the STL.