Today, here in Star City, Russia, I had one of those special days. You know, one of those days when I truly believe that I am an astronaut and that one day soon I will fly into space. One of those days that makes all of the travel between here and the United States, the family separation and hard work seem not quite so daunting. Today, I was fitted for my seat on the Russian Soyuz TMA spacecraft! 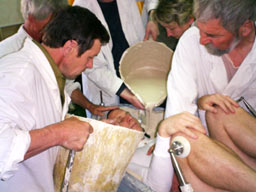 The day began with a van ride to the Zvezda (“star”) Space Facility located to the southeast of Moscow. About 60 kilometers from Star City, it took us about an hour or so to arrive. It is here that they manufacture space flight suits (Orlan [Eagle], Sokol [Falcon], Penguin [self-explanatory!] …Russian tradition has them name their spacesuits after birds), ejection seats for military jets, high altitude pressure suits, airlock components and the like. As a matter of fact, they have even manufactured a “day” suit for children with cerebral palsy that provides them with enough muscle rigidity that they can walk!

As soon as we entered the building I was given a package containing 3 sets of underwear (European style briefs), 3 pairs of socks and 3 sets of knee-length long johns! I was sent to the bathroom and told to change into the briefs and socks with the long johns on over the briefs. Well, let me tell you that I looked mighty spiffy in my white long underwear with black striped briefs underneath! A definite “fashion faux paux” in the Anderson household! At that point, a team of about five engineers began to measure me every which way. They took measurements in places that I didn’t even know I had! They next placed me into a plastic mock-up (model) of a Soyuz seat. Imagine yourself playing the position of catcher on a baseball team while lying on your back. That’s how you sit in your Soyuz seat! Even more measurements were taken…and then things got really interesting!

At this point, wearing my fashionable undies, I was directed to another mock-up of a Soyuz seat. This one was more like a really, really tiny bathtub - which they had me lay in (in the “catcher position”) as they poured fast drying plaster around me. The goal, you see, is to form a mold of my entire backside (quick, bring more plaster!!!)…eventually leading them to build me a custom seat liner that fits my body contour when I am wearing my Sokol launch and entry spacesuit! This will help me have a snug fit when we experience the dynamic launch loads and, upon return to Earth, the potentially violent ground landing (not water like we did in Apollo) of the Soyuz. 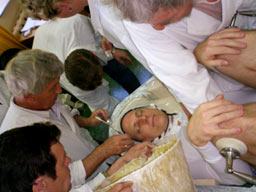 Image at right: Astronaut Clayton Anderson relaxes as the mold hardens around him. Credit: NASA

They poured the upper half of my body first and when it dried a few moments later they took me out of the “tub” and began to carve and smooth the plaster form to relieve any potential pressure points. I climbed in and out several times as we tried to hone in on the final shape. Once that was completed, they poured the lower half of my body (this was easier) and performed the same “smoothing” process leaving us with the full size final mold.

After changing underwear (into full length long johns this time!) I donned the Sokol suit. You may have seen this one on TV…it is one-piece, white with blue trim and includes an attached helmet. This was the real deal! I climbed back into the mold, assuming the launch position. They attached my air-cooling line and closed my launch helmet. I laid back and relaxed my entire body, trying to imagine myself on the launch pad; trying to sense if there were any places that were feeling uncomfortable. I wiggled here and there, shifted my weight, anything to give me a clue. I wouldn’t want to be stuck in a launch countdown with a feeling similar to that you experience when a rock gets lodged in your shoe! Hopefully very soon it will no longer be a dress rehearsal.

Days like today are what I really look forward to. They bring my dream a bit closer to reality.

Всего Хорошего! (Vce-yeh-vo Ha-row-sho-vo) All the best!
› Back To Top