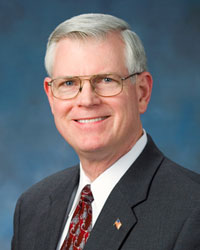 Mike Coats, former astronaut, returned to NASA in November 2005 to serve as the 10th director of the Johnson Space Center in Houston, Texas.

Coats, a Navy pilot and flight instructor, logged 315 combat missions in Vietnam and has more than 5,000 hours flying time in 28 different types of aircraft, and more than 400 carrier landings.

From 1991-1996 he was Vice President of Avionics and Communications Operations for Loral Space Information Systems.

From 1996-1998 he was Vice President of Civil Space Programs for Lockheed Martin Missiles and Space in Sunnyvale, California.

From 1998-2005 he was Vice President of Advanced Space Transportation for Lockheed Martin Space Systems Company in Denver, Colorado.

In 2012, Coats was honored with the National Space Trophy by the Rotary National Award for Space Achievement (RNASA) Foundation established by the Space Center Rotary Club of Houston. The trophy is presented each year to the U.S. citizen, who, as judged by his or her peers, has made the most significant contribution to the U.S. Space Program.

Coats also has been recognized as a Fellow of the American Institute of Aeronautics and Astronautics (AIAA), was inducted into the Astronaut Hall of Fame, been awarded the FAI Gold Space Medal and three Distinguished Flying Crosses, in addition to a number of other honors.

He is married to the former Diane Eileen Carson of Oklahoma City, Oklahoma. They have two grown children, a daughter and a son and two adorable, identical twin granddaughters.