The early stages of Johnson Space Center’s development began in 1958, when the newly named National Aeronautics and Space Administration (NASA) established the Space Task Group (STG) to oversee manned spaceflight programs. When President John F. Kennedy later determined that America would put humans on the moon within a decade, Houston was chosen as the site where manned missions would be managed and supervised.

Robert R. Gilruth had been working as an engineer at the National Advisory Committee for Aeronautics (NACA) Langley Aeronautical Laboratory in Hampton, Virginia, since 1937. After seeing the Soviet Union launch Sputnik 2 in 1957 with a dog onboard, Gilruth was inspired to propel NACA into human spaceflight and push further ahead in the “space race.”

When NACA became NASA in 1958, Gilruth was appointed head of the STG. He had established a name for himself in Washington, D.C., as he worked hard to find out how the U.S. could pursue and succeed at sending humans into orbit. 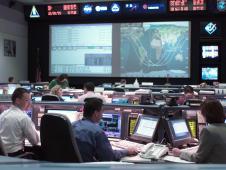 On Nov. 3, 1958, by Gilruth’s command, 36 individuals from the Langley Research Center transferred to the STG, to be located at Langley but report to NASA Headquarters in Washington, D.C. This group would start development of a manned satellite program, later called Project Mercury. Soon individuals from the Lewis Research Center in Cleveland, Ohio, joined the Langley team as well as aerospace engineers from Canada who became available after the AVRO Arrow CF-105 fighter plane was discontinued.

On Nov. 26, 1958, the manned satellite program officially became known as Project Mercury. Within this program, six manned flights flew between 1961 and 1963, reaching the program’s three main goals: to insert a spacecraft into Earth orbit with a human being onboard; to determine man’s ability to function in microgravity; and to safely recover the passenger and capsule.

Then, on May 25, 1961, just three weeks after Alan Shepard became the first American in space, President John F. Kennedy set a goal for the United States that would surpass any previous engineering and scientific feat: Humans would land on the moon and return safely to Earth before the end of the decade. 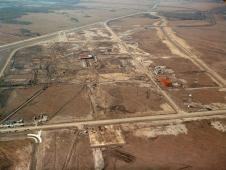 On Sept. 19, 1961, NASA announced that the new spaceflight center would be located in Houston, Texas, and named the Manned Spacecraft Center (The STG was renamed MSC in the fall of 1961.). More than 20 sites competed to host the center. NASA established criteria for the proposed site, which included: transportation in ice-free water by barge, a mild climate, all-weather commercial jet service, a Department of Defense air base that could handle military aircraft, a university nearby, and property that fell within certain cost parameters.

Texan politicians pushed tirelessly for the establishment of a spaceflight laboratory in Houston. Lyndon B. Johnson, an enthusiastic supporter of the space program, served as vice president under President Kennedy. Other Texans held leadership positions within the Congress, like Sam Rayburn, then speaker of the house and Albert L. Thomas who represented the area adjacent to Clear Lake and chaired the House Appropriations Committee. Olin E. Teague served on the House Committee on Science and Astronautics and headed the Subcommittee on Manned Space Flight.

Houston gave a grand welcome to 751 NASA employees who relocated to the city and 689 new hires. Houston—the sixth largest city in the country at the time—welcomed NASA. Thousands of Houstonians came out to greet the MSC workers at a Fourth of July parade in 1962. Following this presentation, MSC employees feasted on barbecue at the Sam Houston Coliseum, while local high school bands played “The Eyes of Texas” and “Dixie.” 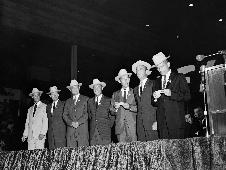 The original seven Mercury astronauts, each wearing new cowboy hats and a badge in the shape of a star, are pictured on stage at the Sam Houston Coliseum. A large crowd was on hand to welcome them to Houston. Photo credit: NASA.
› View larger

On the morning of Sept. 12, 1962, Kennedy gave a historic speech in Rice University’s Rice Stadium that re-emphasized his speech to Congress the previous year. During his talk, President Kennedy expressed his reasons for wanting to send Americans to the moon before the close of the decade “to become the world's leading space-faring nation.”

In 1973, the center was renamed in honor of the late president and Texas native, Lyndon B. Johnson. From the early Gemini, Apollo and Skylab projects to the Space Shuttle and International Space Station Programs and beyond, the center continues to lead NASA's efforts in human space exploration.