Liftoff from Launch Complex 19 at Cape Kennedy was at 10:16 a.m. EST June 3, 1965, and flight trajectory was very nearly as planned. The spacecraft with astronauts James A. McDivitt as command pilot and Edward H. White II as pilot was placed in an orbit with a perigee of 100 miles and an apogee of 175 miles. 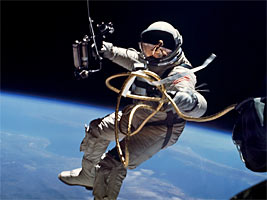 Image at right: Astronaut Edward H. White II, pilot of the Gemini IV space mission, is photographed during his extravehicular activity, the first ever by an American. The photo was taken in June 1965. Credit: NASA
+ View Image

Gemini IV, with McDivitt and White aboard, landed about 48 miles short of the intended target, the USS Wasp, at 11:12 a.m., Houston time, June 7, after making 62 revolutions of the Earth in 97 hours and 56 minutes. Both crewmembers were in fine shape and were returned to the Wasp by helicopter.

For the first time, flight controllers performed their jobs from the new Mission Control Center at the Manned Spacecraft Center. Gemini IV became the first flight controlled from Houston and the longest duration mission to that date. The Cape Kennedy control center provided backup services for the initial launch and trajectory, and Goddard Space Flight Center's computer center provided support for the entire four-day mission. GSFC was the communications center. The computers were in the new MCC for the first time.

This flight established JSC as the nation's home for Mission Control. But this responsibility could have easily gone to Goddard Space Flight Center or to the Kennedy Space Center and, had it, JSC would not be the nerve center for space shuttle and International Space Station flight control operations that it is today.

The concept of a ground-based flight control team to manage human space missions was implemented from the beginning of Mercury. Flight control remains a key element of the mission planning process. For the most part, program offices delineate mission activities and objectives. With its vast expertise, the flight control team uses spacecraft and space station systems to accomplish mission objectives and to monitor the status of flights as they occur.

Image above: An overall view of the Mission Operations Control Room on the second floor of NASA's Houston Mission Control Center. The space shuttle orbiter spotter or symbol can be seen in the center of the tracking map on the large screen in the front. Credit: NASA + View Image

As Mercury began orbital missions with John Glenn's flight on Feb. 20, 1962, equipment and procedures needed to be updated. And when Gemini came on line, the system established for the Mercury Program also had to be created. The Mercury control center at Cape Canaveral used commercial off-the-shelf electronics gear, but more was needed. It became obvious that existing equipment was inadequate. A study of the needs and options for a new mission control center was begun.