Home of the Nation's Astronaut Corps

They were the Original Seven, the chosen, the first of a new breed of explorers, and in the early 1960s there were few celebrities on the planet who could compare with them. When they made their first trip to Houston on July 4, 1962, all the stops were pulled out. They were given a motorcade along a route lined with cheering admirers. Speeches were made, the welcoming ceremony was pure Texan, and a vast barbeque was thrown in their honor at the Houston Coliseum.

Now, four decades later, about 160 astronauts are at JSC including some from overseas. They and the people on the ground supporting them have some of the most advanced training facilities available anywhere to prepare them for the exacting tasks and dangers they will face on actual missions. 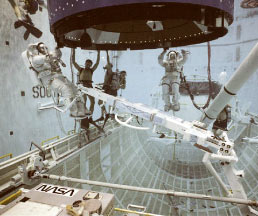 The Weightless Environment Training Facility at the center was once used to train astronauts for spacewalks. When it proved inadequate for spacewalk training in anticipation of International Space Station assembly, plans were put into motion for the Neutral Buoyancy Laboratory, a 6.2-million-gallon, 102- by 202- by 40-foot pool. Built to support ISS construction, the Sonny Carter Training Facility was retrofitted to house the new NBL, which began operations in January 1997. Complete with mockups including those of station components and the Hubble Space Telescope in the water, the facility is used to train astronauts in procedures they will perform during upcoming missions.

Ellington Field hosts center flight operations. The aircraft include a KC-135 four-engine jet used to produce space-like weightlessness by flying a series of arcs, a twin-engine Gulfstream specially modified to perform like a landing shuttle orbiter, and T-38 jet trainers with state-of-the-art instruments that are flown by astronauts to maintain their proficiency.