Building the new center was the easy part. But major questions still remained. How does one do these human space missions? How does one design the necessary spacecraft? How does one manage the contractors and garner the best ideas and results from industry? 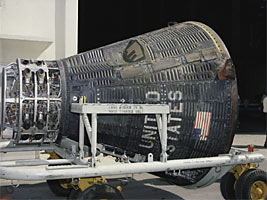 Image at right: The recovered Gemini V spacecraft is delivered back to the NASA facility at Cape Kennedy, Florida, following the successful third human Gemini mission in August of 1965. Credit: NASA + View Image

"We came to Houston," said Maxime Faget, chief engineer, MSC. "We had to build a center. All of the engineering facilities, they all had to be specified, worked out, negotiated, and an organization had to be built up. It was a pretty yeasty time. We went from essentially a one-man project, [Mercury], a one-program project, to really trying to do three things at the same time, three programs at once plus build up the center." 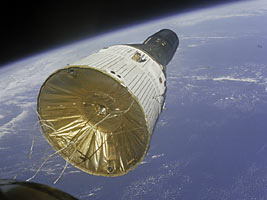 Image at left: This view of the Earth-orbiting Gemini VII spacecraft was taken from the Gemini VI spacecraft during their historic rendezvous mission in space. Credit: NASA + View Image

In addition to the Engineering Directorate, the program office played a major role in managing contracts and implementing contractors. These major entities-the Engineering Directorate, the program office and, soon, the flight controllers and operators-did not operate in a vacuum; the integrated strength of all of these organizations was crucial in achieving NASA's and the nation's grand human space flight objectives. This process was true for the MSC in the early days of human space flight; it still holds true today.