In 1998, when the first module of the new International Space Station launched from the Baikonur cosmodrome in Kazakhstan, world attention once again riveted towards space, this time to witness a new beginning. Twenty-one flights into a 90-flight assembly sequence as of this month, the ISS is already a spacecraft of unprecedented capability for advancing the human exploration of space. 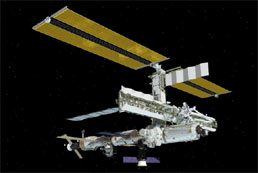 Unlike the first era of space flight that began with Yuri Gagarin's flight in 1961, characterized by Cold War competition and "a space race," this new era of space flight is heralded as the age of the "International Astronautics and Cosmonautics." It began on the eighth flight to the ISS, when Commander Bill Shepherd, Soyuz Commander Yuri Gidzenko and Flight Engineer Sergei Krikalev of Expedition One, opened the hatch to ISS on Nov. 2, 2000. Human space flight is now characterized by internationalism and partnership, with fresh approaches to scientific research and commercialization. A future pathway for space exploration and business is now being enabled.

Never before had nations on Earth committed to such a monumental engineering integration task whose scope and complexity outstripped any previous efforts for earth orbiting stations. With one million pounds of hardware under development in locations throughout world, it took new forms of intergovernmental agreements and Memorandums of Understanding among five space agencies in the United States, Canada, Europe, Japan and Russia, to lace together one huge international team from 16 countries (Belgium, Brazil, Canada, Denmark, France, Germany, Italy, Japan, the Netherlands, Norway, Russia, Spain, Sweden, Switzerland, United Kingdom and the United States) dedicated to building and operating a human outpost in space, with permanent international presence, poised for unknown challenges and discoveries. The legal agreements meticulously outlined each Partner's contributions, and share of common operating responsibilities, utilization opportunities and crew time. Also unique to the ISS Program were barter arrangements where partners could trade their shares in these responsibilities across hardware, operations, people and science.

For the people working on ISS, it is also an unprecedented opportunity to contribute to the security of the United States and the world. Nations from around the world are working closely to build and operate this enormously complex outpost in space. They are doing so both from a desire to share in this destiny together, and a need to rely on the expertise and resources of each other's national wealth.

In what many view as its greatest benefit, former Cold War adversaries in the U.S. and Russia are now working together as partners, colleagues and friends. This intimate interaction between entire communities has done more to bridge fears and mistrust between these peoples in the last eight years than the efforts of diplomats over the last half-century.