To assist in honing the interaction between crews and the shuttle systems, the shuttle mission simulators provided integrated training for crews, the MCC and mission operators, payload support groups, and tracking and telemetry systems. The SMS provided real-time simulation capability for all phases of shuttle orbital flight. Still vital in training today, its three basic stations, a fixed-based crew station, a network simulation system and a motion-base crew station, became operational in 1978.

Image above: Five astronauts and two payload specialists made up the crew that flew aboard the Space Shuttle Challenger in January 1986. Crewmembers were (left to right, front row) astronauts Michael J. Smith, Francis R. (Dick) Scobee and Ronald E. McNair; and Ellison S. Onizuka, Sharon Christa McAuliffe, Gregory Jarvis and Judith A. Resnik. McAuliffe and Jarvis were payload specialists, representing the Teacher in Space Project and Hughes Co., respectively. On Jan. 28, 1986, the seven Challenger crewmembers lost their lives following an explosion during the launch phase of the STS-51L mission. Credit: NASA + View Image

In addition, with crews of six or eight flying aboard, the space shuttle changed the sociology of space flight. Astronauts were divided into two categories: pilots responsible for flying and maintaining the orbiter and mission specialists responsible for experiments and payloads.

The space shuttle introduced several new tools to the business of space flight including the shuttle's robot arm, the Remote Manipulator System. The shuttle has been used for numerous satellite repair and deployment missions. In 1992, the crew of STS-49, for example, successfully captured, repaired and redeployed the INTELSAT VI satellite, which had been stranded in an unusable orbit since its launch in March 1990. Since returning to flight in 1988, the shuttle has carried only those payloads unique to the shuttle or those requiring a human presence. The majority of these have been scientific payloads including some critical space science projects including the Hubble Space Telescope, the Galileo Jupiter spacecraft and the Gamma Ray Observatory. 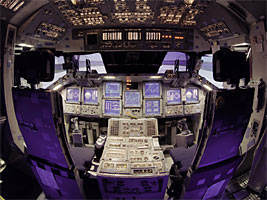 Image at left: This "fish-eye" view illustrates NASA's Multifunction Electronic Display Subsystem, otherwise known as the "glass cockpit." It represents a number of important modifications that have been accomplished on the Orbiter's flight deck. This photo is actually one of the fixed base space shuttle mission simulator in the Johnson Space Center's Mission Simulation and Training Facility. The fixed base simulator was outfitted with MEDS to be used by flight crews for training. Credit: NASA + View Image

In 1995, the shuttle added a new capability to its repertoire. In preparation for International Space Station development, the crew of the space shuttle began a series of eight dockings and five crew exchanges with the Russian space station Mir. More recently, the shuttle has been used as the workhorse for space station assembly, carrying supplies and components to the ISS including the U.S. Unity module, the U.S. Destiny Laboratory, Canadarm2 (the station's new robotic arm) and the U.S. Joint Airlock used to conduct spacewalks from the station.

Twenty years and more than 100 missions after its first flight, the space shuttle remains the key vehicle in the world's space transportation system. Since its inception, more than 260 astronauts-American and international-have flown aboard the space shuttle. And the shuttle fleet is only about half way through its planned lifetime.

"I believe that the space shuttle, the world's only reusable launch vehicle, will fly at least another 100 missions over the course of the next 15 to 20 years," said NASA Space Shuttle Program Manager Ron Dittemore. "It will continue to play a key role as the workhorse of American space transportation in carrying International Space Station crews and components to and from the orbiting outpost and performing a number of other vital missions in support of science, engineering and exploration."