The Space Shuttle Columbia roared into orbit for the first time on April 12, 1981, from Florida's Kennedy Space Center. Maneuvering through space and circling the Earth 36 times, astronauts John Young, commander, and Robert Crippen, pilot, tested its systems, then landed like an airplane on schedule two days, six hours, 20 minutes and 52 seconds later. 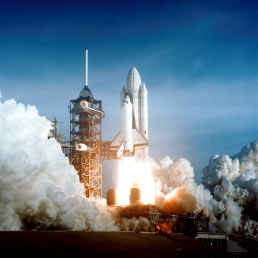 Image at right: After six years of silence, the thunder of manned space flight is heard again, as the successful launch of the first Space Shuttle ushers in a new concept in utilization of space. Credit: NASA + View Image

"The Columbia operated beautifully," said Young, who now serves as JSC associate director (technical). "As we tested all its systems, we found the orbiter always performed like a champ. Its demonstrated capabilities are still a real tribute to the thousands of men and women in the United States who worked so hard to design, develop, test and construct this incredible aircraft and spaceship. Its remarkable operational ability has made all of us proud to be associated with the STS-1 trailblazer of 20 years ago."

The world hailed Columbia as the first true spaceship-an incredible flying machine. It heralded the beginning of the era of human round-trip travel from Earth.

This was a new and unique spacecraft, unlike any that had ever been produced. Designing it had offered some new and difficult technological problems. The shuttle was to be a considerably more complex machine than previous Apollo-Saturn systems. No vehicle had yet been built that could be piloted both within and outside of the Earth's atmosphere. The shuttle was a launch vehicle, spacecraft and glider. Finally, because it was designed for piloted landings, there could be no unmanned test flights as there had been for all previous space vehicles. 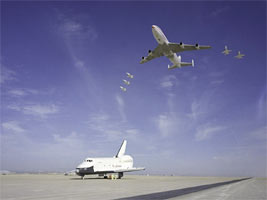 Image at left: This impressive scene was photographed when the NASA 747 carrier aircraft and five T-38 aircraft flew over the Space Shuttle Orbiter 101 “Enterprise” while it was parked on the runway at Edwards Air Force Base in Southern California. The Orbiter 101 had just completed a five-minute, 31-second unpowered mission during the second free-flight of the Space Shuttle Approach and Landing Test series, on September 13, 1977, at the Dryden Flight Research Center. Credit: NASA + View Image

While the shuttle system was something new and different, development could now draw upon a reservoir of aerospace technology, which was virtually nonexistent a decade earlier. Design, development and testing efforts could also draw upon the center's unique facilities and capabilities. At the core of what JSC was and continues to be is the engineering expertise in its laboratory and testing facilities. These include the vibration and acoustic facilities, the Shuttle Avionics Integration Laboratory, the atmospheric re-entry materials and structures lab, the thermal-vacuum labs, the electronic system test lab, the space environment simulation lab, the life sciences labs, and the shuttle mission simulator. In addition, the center possesses some of the most advanced electronic, radio and radar equipment available. During shuttle development, it created some new equipment that was previously nonexistent.

The White Sands Test Facility in New Mexico and its personnel, facilities and equipment played a key role in shuttle development. White Sands continued to operate propulsion and materials testing labs during the era of shuttle development as it had for Apollo and as it continues to do today. Engine test stands at the laboratories include altitude chambers that simulate the vacuum of space during engine firings. Materials test labs are constantly adapted to simulate unique space conditions.