In October 1970, Gilruth headed a small NASA delegation for an initial visit to Moscow to discuss a joint venture. Lunney, who had become the center's project manager for the Apollo-Soyuz flight, accompanied him. Representatives from the U.S. and Russia agreed to establish working groups to study systems for making Soviet and American spacecraft compatible for rendezvous and docking maneuvers. 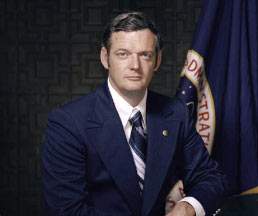 Following additional meetings, in May 1972, when President Nixon visited Moscow, he and Alexei Kosygin, chairman of the Soviet Council of Ministers, signed an agreement providing for cooperation and the peaceful use of space by the two nations. The leaders specifically approved the Apollo-Soyuz flight being planned and they agreed on a 1975 launch.

Alexei A. Leonov, who had made history's first spacewalk in 1965, and rookie Valeriy N. Kubasov were launched aboard Soyuz 19 on July 15, 1975, from Baikonur in the Soviet Union. A few hours after the Soviet launch, Thomas P. Stafford (a veteran of three flights), Vance D. Brand (who had never flown in space) and Donald K. Slayton (the only one of the original seven astronauts who had never flown) were launched from Florida aboard Apollo CSM 111. The two vehicles then found each other following a script of very carefully timed and calculated orbital and phasing maneuvers. They began docking maneuvers on July 17 and completed the docking about 12 hours later. When the hatches between the two spacecraft were opened, Leonov and Stafford greeted each other. It was an incredible moment of friendship amid a backdrop of years of Cold War rivalry.

The crews entered each other's compartments, conducted scientific experiments and, after two days joined together, closed the hatches and undocked. An additional docking maneuver was completed before the final separation on July 19. Soyuz 19 returned to Earth on July 21 and the Apollo crew remained in orbit until splashdown on July 24. 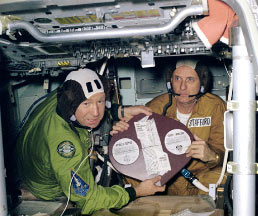 The final mission of the Apollo era, in July 1975, was the first in which spacecraft from two nations rendezvoused and docked in orbit.

"The concept of compatible rendezvous and docking systems for crew rescue was agreed to by the USA and Soviet Union even during the depths of the Cold War," said Lunney. "It was demonstrated by the actual groundbreaking flight test in July 1975. Later, this experience provided the basis for a decision almost 20 years later to join forces with Russia in building the International Space Station."

The Apollo/Soyuz mission resulted in a number of technical developments including a common docking system, which had to be specifically designed so that the different spacecraft could connect in orbit. The project also gave both sides a view of the other's space program. In preparation for the flight, Soviet cosmonauts and their backups visited and trained at the Johnson Space Center and the American crew and their backups paid visits to Moscow. Flight controllers from both nations also conducted joint simulations.