Whereas space flights through Apollo 11 concentrated on development and operations, later Apollo missions, then Skylab and, more recently and to an even greater extent, space shuttle and ISS flights have focused on operations, science and applications. Reorganizations of the center's directorates in the early 1970s denoted the rising significance of science and applications in space flight programs. The Lunar Samples Office, a Planetary and Earth Sciences Division and a separate Earth Observations Aircraft Program Office sprung up across the center. Today JSC remains NASA's repository for lunar samples and its home for the study of the science and medicine of space flight.

From the first moon rocks of the late 1960s to today's Martian meteorites, JSC scientists have led the way in the study of fascinating rocks to better understand how our solar system, and perhaps life itself, came into being. The curators of these Apollo moon rocks and Antarctic meteorites are preparing for the return of samples by two current NASA missions: Genesis will collect samples of the solar wind and Stardust will return samples of Comet Wild 2. Meanwhile the team is developing plans to bring home samples of Martian soil and rocks to continue the search for life beyond Earth. 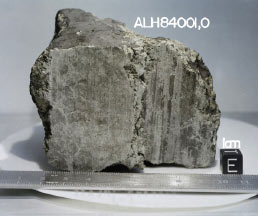 Image at right: This 4.5 billion year old rock, labeled meteorite ALH84001, is believed to have once been a part of Mars and to contain fossil evidence that primitive life may have existed on Mars more than 3.6 billion years ago. The rock is a portion of a meteorite that was dislodged from Mars by a huge impact about 16 million years ago and that fell to Earth in Antarctica 13,000 years ago. Credit: NASA + View Image

From the beginnings of the space program, flight surgeons and life sciences researchers have played an important role in the human space flight team. Flight surgeons helped select the first astronauts and worked with them to better understand how the human body would react to space travel.

For more than 40 years, astronauts, in cooperation with life scientists, have studied adaptation to space. One of the three objectives of the Mercury Program was to observe human performance during launch, Earth orbit and landing. What began with the first EKG transmitted from Sheperd's Mercury capsule became weeklong medical experiments aboard the space shuttle and today's continuing, in-depth scientific investigations aboard the International Space Station.

Several physicians have themselves become astronauts. In 1965, Dr. Kerwin was among those selected as part of the first group of scientist-astronauts. Drs. Donald Holmquest, Story Musgrave and William Thornton joined him two years later. Kerwin, Musgrave and Thornton would each have a profound effect on the nation's space program, with Kerwin, as discussed, flying aboard Skylab and Thornton and Musgrave playing key roles in the Space Shuttle Program. 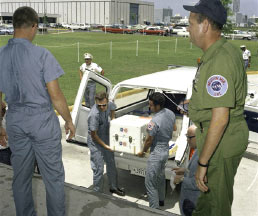 "Over the last 40 years, the efforts of NASA's life sciences researchers have led to a better understanding of human reaction to living in the space environment and to the development of countermeasures to overcome the negative aspects of living in the space environment," said Dr. Sam Pool, assistant director for space medicine in JSC's Office of Bioastronautics. "Today's life scientists perform peer-reviewed research to help astronauts not only live in space, but thrive there. Research into the neurological system, the cardiovascular system, nutrition, and bone density are just a few of the many important areas of research to ensure humans will be fully prepared for our next journey-the exploration of our solar system."