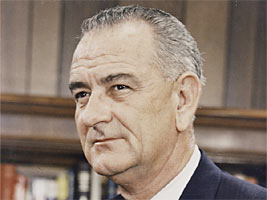 A full house was on hand to witness the dedication ceremonies held at JSC Aug. 27, 1973, commemorating the renaming of the center.

In his opening remarks at the ceremonies, then-JSC Director Kraft said, "It's been just a few months since the legislation was enacted, designating this center in honor of our late president. The new name is so appropriate, however, that it seems now that we've always been known as the Johnson Space Center."

The former MSC was renamed in honor of the late president on Feb. 17, 1973. Dedication ceremonies on Aug. 27 were scheduled to coincide with what would have been the late president's 65th birthday. Johnson died on Jan. 22, 1973.

As these events took place on the ground, the crew of Skylab 3 was making one of what would finally be 858 Earth orbits.

The Skylab Orbital Workshop was launched with no crew on May 14, 1973. Subsequent crewed missions were launched later that year on May 25, July 28 and Nov. 16. Mission objectives were to show that space station operations were medically feasible, define design requirements and demonstrate science performance during long-duration flights.

The launch of the workshop was marred by the loss of its thermal/micrometeoroid shield during ascent. One of the main solar panels was also lost and the other pinned down. It reached orbit with inadequate electrical power and dangerously high temperatures inside. These problems were overcome by the work of the engineering teams at JSC, Marshall Space Flight Center and their contractors.

The first crew was launched 10 days later than planned, but with a full set of equipment with which to erect a substitute for the heat shield and to free up the unextended solar panel. Their success showed the value of spacewalks for repair of orbiting spacecraft. 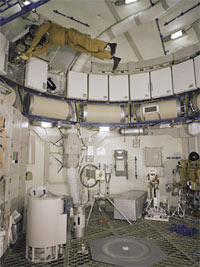 Image left: An interior view of the Skylab Orbital Workshop (OWS) trainer located in Building 5, Mission Simulation and Training Facility, at the Johnson Space Center. This is the OWS's forward compartment. This compartment has the water supply, some experiments, locker stowage, etc. The figure represents a Skylab crewman working in zero-gravity. The OWS's crew compartment is on the other side of the floor of this compartment. Credit: NASA + View Image

"Skylab was a prototype," said Kerwin. "It was intended to pave the way for a permanent space station. Its designers and operators will take special pride in the future success of the International Space Station."

The last Skylab mission, Skylab 4, was also the longest-84 days. Gerald Carr, William Pogue and Edward Gibson conducted numerous experiments, including an observation of the comet Kohoutek, before returning to Earth on Feb. 8, 1974.

"I think probably the most important contribution of the Skylab flight was the medical stuff," said Carr. "We proved, I think, just absolutely positively that the human being can live in weightless environment for an extended period of time, and it's, of course, subsequently been proved that you can stay up at least a year or a year and a half. But medically, we gathered the data that I think gave the Russians and other people the understanding and the courage to say, 'Okay, we can stay up for longer periods of time.'"

The Skylab Program demonstrated that humans could live and work in space for extended periods of time, and it expanded humanity's knowledge of solar astronomy well beyond Earth-based observations.