The flight was launched on April 11, 1970. Disaster struck on April 13. The spacecraft had reached 85 percent of the distance to the moon when an oxygen tank exploded, wiping out the main supply of life-sustaining oxygen and power. People all over the world responded to the plight of the three astronauts in the crippled spacecraft.

The astronauts moved out of the stricken Command Module and into the cramped quarters of the Lunar Module. The Lunar Module, built for the short trip for two people to land on the moon, would serve as the lifeboat for a four-day journey for three people. Using the Lunar Module's descent engine for propulsion, the crew looped the spacecraft around the moon and headed home. 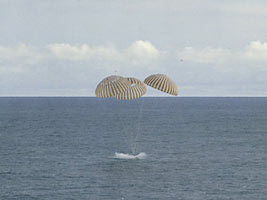 Image at right: A perilous space flight comes to a smooth ending with the safe splashdown of the Apollo 13 Command Module in the South Pacific Ocean, only four miles from the prime recovery ship, the USS Iwo Jima. The crewmembers were transported by helicopter from the immediate recovery area to the USS Iwo Jima. Credit: NASA + View Image

While each element of the rescue was carefully planned and carried out, the crew battled cold, fatigue and physical discomfort. The Lunar Module's 49.5 hours of life support for two people had to be stretched to 84 hours for three people. With guidance from JSC spacecraft experts and life-support engineers, the Apollo 13 astronauts jury-rigged marvels of ingenuity for survival.

After splashdown in the Pacific Ocean on April 17, Apollo 13 was called a brilliant demonstration of the human capability under almost unbearable stress. At JSC it was known by many as "the finest hour."

"I look back on Apollo 13 as an ultimate test of all of our capabilities," said Apollo Flight Director Glynn Lunney. "The circumstances surrounding the explosion presented the team with a situation which had almost only one unique scenario for success out of a large set of other possibilities. Success was due to the tremendous teamwork of talented people integrated into a very powerful problem-solving team of operators-flight controllers and crews-engineering, program office personnel and contractor teams throughout the country."

The Apollo Program included 11 piloted missions: nine went to the vicinity of the moon, and six of those landed men on the moon. It greatly increased the pace and complexity of ground operations, both before launch and during the missions, when ground controllers had to track two spacecraft at the same time. The lunar missions also required extensive training. Apollo astronauts logged more than 84,000 hours practicing for their flights. The training included everything from simulations of lunar gravity, to geology field trips, to flying the Lunar Lander Training Vehicle at Ellington Field. 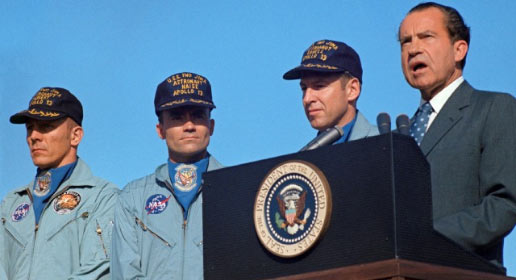 The Apollo Program came to an end in 1972. By that time, astronauts had extended the range and scope of their lunar explorations. The final three lunar landings were far more sophisticated than the first three, in part because the astronauts carried a lunar rover that allowed them to roam over the surface of the moon. The end of the program also ended the first wave of human exploration of the moon.

From the beginning, the strength of JSC was built on its people-their talent, vision and dedication-and the integrated organizational framework composed of the Engineering Directorate, program offices, astronauts, the flight control team, flight surgeons and science. The integration of experts across all the necessary disciplines was needed to define and design spacecraft and all necessary engineering requirements; manage budgets, programs and contractors; plan and execute missions; and interface with all the sister NASA and support organizations. This was the well-oiled machine that successfully met the challenge of Apollo.