Dr. Wernher von Braun, the first director of NASA's Marshall Space Flight Center in Huntsville, Ala., and his team of rocket scientists masterminded the mammoth Saturn V rocket that launched humans to the moon. Every booster rocket used in America's lunar landing missions was static fired and flight certified at what was then known as the Mississippi Test Facility, now NASA's Stennis Space Center, which this year is also celebrating its 40th anniversary. All first- and second-stage rockets of the Saturn V tested at the center flawlessly performed their missions.

Apollo 8 expedited the expedition to the moon. Scheduled to be the first human Apollo launch by a Saturn V, Apollo 8 was originally scheduled to test the manned Lunar Module in an Earth orbit. Changing it to a translunar mission marked a giant step in NASA's lunar landing drive.

Apollo 8 flew as scheduled on Dec. 21, 1968, carrying Frank Borman, James A. Lovell Jr. and William A. Anders on 10 orbits around the moon. The entire mission was conceived, planned and trained for in six months. The success of Apollo 8 made a lunar landing before the 1960s ended possible. This tight schedule was predicated on the knowledge that the Soviet Union was planning a cislunar flight in that same time period, and it was imperative that the United States be in the lunar vicinity before the Soviets. 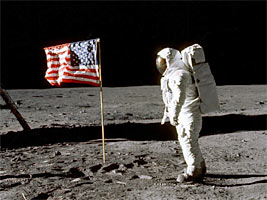 On July 16, 1969, Apollo 11 left Earth for a mission to land men on the moon. As Apollo orbited the moon, the Lunar Module, known as the "Eagle" by its two crewmembers, Armstrong and Edwin Aldrin, separated nicely from the mother ship on the back side of the moon. But when the Command Module cleared the moon and communications resumed with Mission Control, communications and telemetry between the MCC in Houston and Apollo were bad. At this point Mission Control had about five minutes in which to decide whether or not to abort the lunar landing. Then, with the Lunar Module four minutes away from its landing, the crew discovered that its altimeter and velocity gauges were in error. Those problems were corrected. Next the crew reported a computer alarm. A quick flight control analysis resulted in a decision to continue. But as the Eagle prepared to set down, Armstrong was forced to override the planned landing site to avoid rocky and dangerous terrain. The Eagle did land with less than 30 seconds of fuel remaining. For a time, due to unanticipated irregularities of the lunar gravitational field, NASA did not know precisely where.

For many who worked at JSC in April 1970, the flight of Apollo 13 will never be forgotten. Never before had the hostility of space been so starkly evident and the threat of catastrophe so imminent.