When Neil Armstrong's heart rate rose to 156 as his Eagle Lunar Module touched down on the moon, there were similar reactions on Earth as pride, awe and humility struck the hearts of everyone who had played a part, however small, in the accomplishment-not to mention the hearts of those millions who watched the spectacular event unfold on their television sets. 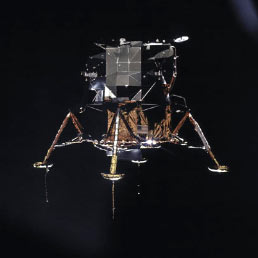 Image at right: The Apollo 11 Lunar Module (LM), in a lunar landing configuration, is photographed in lunar orbit from the Command and Service Modules (CSM). Inside the LM were astronauts Neil A. Armstrong, commander, and Edwin E. Aldrin Jr., lunar module pilot. Astronaut Michael Collins, command module pilot, remained with the CSM in lunar orbit while Armstrong and Aldrin descended in the LM to explore the lunar surface. Credit: NASA + View Image

Apollo was a feat of modern technology. The Apollo Lunar Module was the first true spacecraft designed to fly only in a vacuum, with no aerodynamic qualities whatsoever. Launched below the Apollo Command/Service Module on the Saturn booster, it separated in lunar orbit and descended to the moon with two astronauts inside. Following the brief stay on the moon and some extravehicular activity by the astronauts, the Lunar Module's ascent stage fired its own rocket to rise to the region where it could dock with the Command/Service Module in lunar orbit, an unprecedented accomplishment.

In 1961, when human flights to the moon were being seriously debated, basic understanding of the undertaking was lacking. Little was known as to what kind of spacecraft was needed to accomplish the mission. A ship returning from a lunar voyage faced a much more difficult injection into the Earth's atmosphere than did one in Earth orbit. Too shallow an angle and the vehicle might "skip" off the Earth's atmosphere; too steep an approach would result in certain incineration. Communications and control over vastly greater distances than Earth orbit were untested. The unknown weighed far more heavily than the known. That is what made the enterprise so challenging and exciting.

Gemini was indispensable in developing the flight control techniques and procedures necessary for Apollo orbital rendezvous. Mercury and Gemini flight experiences defined the general philosophy of the interplay between the MCC in Houston and the astronauts in the spacecraft and established the flight interrelationship between the NASA operating teams, hardware contractors and contractor flight controllers.