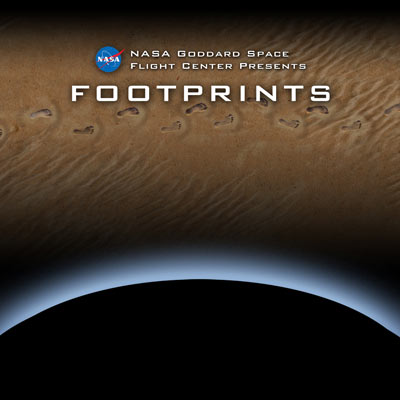 The Earth is not flat.

That’s the conceptual spark for a new film created at the NASA Goddard Space Flight Center. Using an advanced media projection technology called Science On a Sphere developed by the National Oceanic and Atmospheric Administration (NOAA), FOOTPRINTS is the first fully produced film of its kind. The movie presents advanced satellite data and other visual effects on a dramatic spherical screen, affording viewers a chance to experience planets and planetary science in a way that’s more natural to their actual appearance. The Earth guest stars in a variety of guises, from depictions of the biosphere to planetary views of city lights at night to dramatic examinations about the science of hurricane formation. Other moons and planets make exciting cameos too, with special presentations of Mars and Earth’s moon. What’s more, the two agencies have announced that they’re releasing this new production to a consortium of science museums that already have Spheres on display. In ten U.S. cities this fall FOOTPRINTS will join other supporting Spheres on public exhibition.

Media and visualization experts at NASA began working with the NOAA technology in the fall of 2005. Until that time, Science On a Sphere had already established an impressive reputation for depiction of planetary data in a dramatic way. But FOOTPRINTS marks the first time that a thorough set of techniques and artistic rules have been applied in the service of a full featured production presented on a spherical screen.

But more than just a showcase for discrete data sets, the 16 minute film provides a conceptual framework about the human drive to explore. By contextualizing data with compelling language, inventive pictures, and dramatic sound, FOOTPRINTS seeks to engage and enthuse audiences who may not understand the practicalities and majesty of NASA’s and NOAA’s observations, and may not otherwise have any contact with what these two science agencies actually do.

As a presentation tool, Science On a Sphere is relatively new. NOAA invented and developed its core hardware and software within the past few years. According to Dr. Alexander MacDonald, the NOAA scientist located at the Earth System Research Laboratory in Boulder, Colorado, who originally conceived of it, Science On a Sphere is intended to present global science as it should be presented and to stimulate students to learn more about the Earth’s environment and the solar system.

Over the past two to three years Science On a Sphere systems have begun to be installed in museums and science centers. In late 2005, scientists and project managers at NASA Goddard saw potential to use the Sphere as both a teaching and an outreach tool and with NOAA’s support decided to bring one to the campus. It’s currently installed at the Goddard Visitor Center. Shortly after initial conversations about procurement, Michael Starobin, Senior Producer for media at Goddard, approached NASA officials with an idea he had to develop a production pipeline for delivery of a feature. “It hadn’t been done before,” said Starobin, “so no one really knew how high the mountain was we had to climb. But it turns out that the view from the top is spectacular.” Starobin and his team delivered not only a first-of-its-kind feature, but also a new set of tools and rules for making more features down the road.

For several years there has been a slowly growing list of planetary data sets that can play on the handful of Spheres located in museums and institutions around the country. In the coming months NASA and NOAA intend to dramatically augment that collection with new images and data. But FOOTPRINTS changes the playing field. With the release of this film, the Goddard team dramatically catapults forward the capabilities of the system, taking it far beyond its initial limits of merely depicting planetary data sets. Beyond encompassing state of the art data visualizations, the production team developed new ways for working with computer generated illustrations and animation, high definition video, graphics, text, and more. In a little more than three and a half months, the core group developed a palette of new technical processes and aesthetic guidelines for presenting media on the Sphere.

The movie asks audiences to consider the idea that what they know is only a function of what questions they’re willing to ask. It’s an intellectual and creative backdrop to the overall production, and also a philosophical backdrop to the excitement about the vital work that NASA and NOAA do in service of the public interest.

Museums around the country are enthusiastic to receive new content like FOOTPRINTS. Not only does it give them a way to further leverage the investments they’ve already made in Sphere systems, but the media itself gives them a chance to reach savvy audiences already well versed in tightly produced media products.