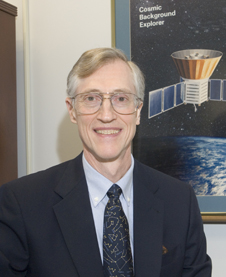 John Mather Credit: NASA
› Larger image The James Webb Space Telescope project is hosting a "Tweetchat" on May 17th from 2-3pm EDT on Twitter. Nobel Laureate and Webb telescope project scientist John Mather will answer your questions about Webb science. Tweet your question with the Twitter hashtag #JWSTscience and your question might get an answer from Dr. Mather and Webb's official twitter account, @NASAWebbTelescp.

The James Webb Space Telescope is an international collaboration of NASA, the European Space Agency and the Canadian Space Agency. The observatory will work primarily in the infrared range of the electromagnetic spectrum with some capability in the visible range. Webb is the premier observatory of the next decade. 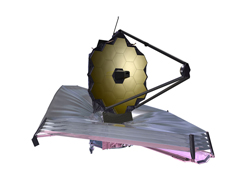 Artist's concept of the James Webb Space Telescope. Credit: NASA
› Larger image Thousands of astronomers worldwide will study every phase in the history of our universe, ranging from the evolution of our own solar system and the first luminous glows after the Big Bang to the formation of solar systems capable of supporting life on planets like Earth.

For more information, visit:
http://www.jwst.nasa.gov/index.html
› Back To Top