Matter Surfs on Ripples of Space Time Around Black Hole 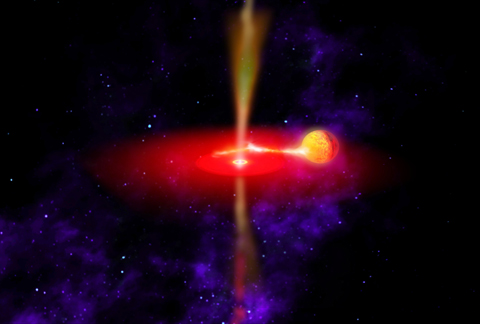 Scientists at Harvard and MIT say they have seen evidence of hot iron gas riding a ripple in spacetime around a black hole, much like a surfer catching a gnarly wave.

The observation confirms one important theory about how a black hole's extreme gravity can stretch light. This also paints an intriguing image of how a spinning black hole can drag the very fabric of space around with it, creating a choppy sea of space that distorts all that passes through it on a descent into the black hole.

Images above and right: Stills from a conceptual animation of hot iron gas riding upon a wave in spacetime around a black hole. Based on the RXTE spacecraft observation, this animation depicts how extreme gravity can cause light to stretch and how a spinning black hole can drag the very fabric of space around with it. Click here for a .mpg animation of this sequence. Credit: NASA. Click here for high resolution images.

Dr. Jon Miller of the Harvard-Smithsonian Center for Astrophysics and Dr. Jeroen Homan of MIT observed the phenomenon with NASA's Rossi X-ray Timing Explorer. They presented this result today at a press conference at the American Astronomical Society meeting in San Diego.

"Black holes are such extreme sources of gravity that they can cause spacetime to buckle," said Miller, who is the lead author on an article to be published in Astrophysical Journal Letters. "Gas whipping around the black hole has no choice but to ride that wave. Albert Einstein predicted this over 80 years ago, and now we are starting to see evidence for it."

A black hole is a region in space where gravitational forces are so great that not even light can escape. Gas and dust funnel towards a black hole in an accretion disk, swirling around and into the void like water down a drain. This process of accretion generates copious amounts of light -- predominantly X-ray radiation, particularly in the innermost (hottest) regions of the accretion disk. Near the black hole, gravity is rather intense, but light still can muster an escape by climbing out of the black hole gravitational well, losing energy during the climb. Thus, scientists can "see" and study black hole activity with X-ray telescopes like the Rossi Explorer.

Miller and Homan, for the first time, found a connection between two important characteristics of black hole observations: quasi-periodic oscillations (QPOs) and the broad iron K line. QPOs refer to the way the X-ray light seems to flicker. A QPO has a frequency measured in hertz, and scientists say the flickering is a result of matter circling a black hole, round and round. The broad iron K line refers to the shape of a spike on a spectrogram, a tool scientists use to analyze light characteristics such as energy. The line is broadened, or stretched to lower energies, because the light is losing energy as it climbs out of a gravitational well.

Using the Rossi Explorer, Miller and Homan studied a black hole named GRS 1915+105, about 40,000 light years away in the constellation Aquila, the Eagle. They noticed that a low-frequency QPO of 1 to 2 hertz was tied to changes in the broad iron K line, as if the two features knew of each other. The fact that the two signals were in synch and were unaffected by other phenomena -- such as black hole jet activity -- strongly suggests that both are occurring very close to the black hole. And this, the scientists say, rules out a theory stating that broad iron lines are created in black hole winds far from the black hole itself. 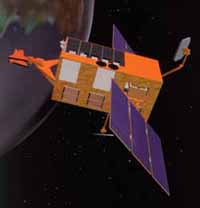 Image left: The Rossi X-ray Timing Explorer is a satellite that observes the fast-moving, high-energy worlds of black holes, neutron stars, X-ray pulsars and X-ray bursts that light up the sky both randomly and periodically. To our eyes, the night sky seems relatively constant. Yet the X-ray universe is forever pulsating. The Rossi Explorer launched into low-Earth orbit on December 30, 1995, and is still going strong. Click here for the animation. Credit: NASA. Click here for high resolution images.

"High-frequency QPOs are likely from matter racing around the black hole, glowing like lightbulbs on a merry-go-round," said Homan. "Of course, matter is moving much faster around a black hole than on any amusement park attraction. We see frequencies of hundreds of hertz, or hundreds of revolutions of the disk per second. That's quite a ride."

Lower-frequency QPOs are a deeper mystery. These are typically 1 to 10 hertz, and they're quite common in many binary star systems with black holes. Miller and Homan say that, in GRS 1915+105 anyway, the lower QPO could be the frequency of a spacetime warp. This would be the fabric of space itself churning around the black hole in a wave. This is known as Lense-Thirring precession, which evolves out of Einstein's general relativity.

Image right: The phenomenon of gravity churning the fabric of spacetime is called the Lense-Thirring precession, a prediction from Einstein's general relativity. This computer simulation shows how extreme gravity can cause space to buckle close to a black hole. Matter rides these waves as it falls toward the black hole, all the while whipping around and around the black hole at fantastic speed. Light emitted from this region oscillates in a specific way as it travels away from the black hole and towards us. Scientists using the RXTE spacecraft have found evidence for this dance of light. Click here for the animation. Animation Credit: University of Illinois at Urbana-Champaign. Click here for high resolution images.

Imagine the accretion disk as a music CD. (The Beach Boys come to mind.) The wave produced by the warp in spacetime would increase the surface area of the flat disk. The broadness of broad iron K lines depends on surface area. So, this momentary increase in surface area, "flickering" at a frequency of 1 to 2 hertz, could explain the repetitive changes observed in the iron K line. Each time the hot iron gas encounters the spacetime warp, the light gets a jolt, and the broad iron K line changes its appearance.

Miller and Homan caution that this is only one explanation of their observation. What is clear, the scientists say, is that they are seeing a connection between QPOs and the broad iron K line, and this in turn means that scientists are probing more closely to black holes than ever before.

For the press release that was issued by NASA on this, click here.